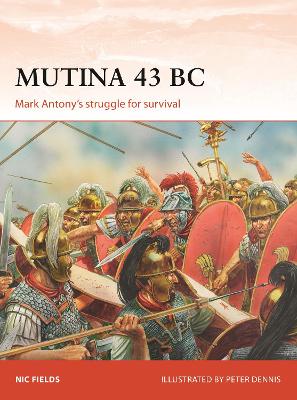 In the aftermath of the murder of Gaius Julius Caesar, his self-declared successor Mark Antony struggled to hold together his legacy. Following an abortive coup attempt by Caesar's adopted son Octavian, two of Antony's legions declared for him, leading to a renewed outbreak of civil war. Antony moved into northern Italy and invaded the city of Mutina, which was held by Decimus Brutus. There they were quickly sandwiched between the city walls on one side and the newly arrived Senate-backed forces of Octavian on the other.

These two heirs of Caesar then fought to claim their former mentor's legacy. Fully illustrated with specially commissioned artwork and maps, this is the full story of the battles which would see Octavian move from being a young, inexperienced aristocrat to the dominating figure of Augustus.

» Have you read this book? We'd like to know what you think about it - write a review about Mutina 43 BC: Mark Antony's struggle for survival book by Nic Fields and you'll earn 50c in Boomerang Bucks loyalty dollars (you must be a Boomerang Books Account Holder - it's free to sign up and there are great benefits!)


A Preview for this title is currently not available.
More Books By Nic Fields
View All