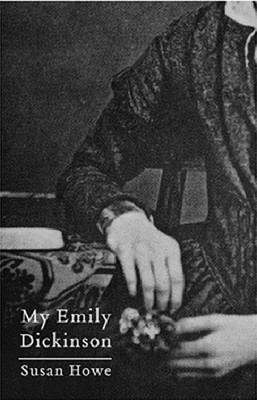 Finally, My Emily Dickinson, Susan Howe's singular and unforgettable 1985 creative study, is available as a New Directions paperbook.
With exacting rigor and wit, Howe pulls Dickinson free of all the sterile and stuffy belle-of-Amherst cotton wool and shows the poet in touch with elemental forces of nature, and as a prophet in all her radical zealotry and poetic glory. Her Emily Dickinson is a unique American genius, a demon lover of poetry -- no neurasthenic spider artist. Howe draws into her discussion Browning, Wuthering Heights, the Civil War, "Master," the great Puritan preachers, captivity narratives, Shakespeare, and phantom lovers. As she chases away narrow and reductive feminist readings of the poet, Howe finds instead a radically powerful and true feminism at work in Dickinson, focusing the whole on that heart-stopping poem "My Life had stood -- a Loaded Gun."
A remarkable and passionate poet-on-poet engagement, My Emily Dickinson frees a great poet from the fetters of being read as a special female neurotic, and sets her against a fiery open sky where "Perception of an object means loosing and losing it...only Mutability certain." My Emily Dickinson won The Before Columbus Foundation Book Award.

» Have you read this book? We'd like to know what you think about it - write a review about My Emily Dickinson book by Susan Howe and you'll earn 50c in Boomerang Bucks loyalty dollars (you must be a Boomerang Books Account Holder - it's free to sign up and there are great benefits!)

Author of more than a dozen books of poetry and two of literary criticism, Susan Howe's recent collection of poems That This, published by New Directions won the Bollingen Prize in 2011. Her earlier critical study, My Emily Dickinson, was re-issued in 2007 with an introduction by Eliot Weinberger. Three CDs in collaboration with the musician/composer David Grubbs, Thiefth, Souls of the Labadie Tract, and Frolic Architecture were released on the Blue Chopsticks label (2005; 2011). Howe held the Samuel P. Capen Chair in Poetry and the Humanities at the State University New York at Buffalo until her retirement in 2007. The recipient of a Guggenheim Fellowship, she was elected to the American Academy of Arts and Sciences in 1999 and served as a Chancellor to the Academy of American Poets between 2000-2006. In fall, 2009 she was awarded a Fellowship to the American Academy at Berlin. Grenfell Press published a fine press edition of "Frolic Architecture with photographic prints by James Welling in 2009. Recently she was an Artist In Residence at the Isabella Stewart Gardner Museum in Boston. In October, 2013 her word collages were exhibited at the Yale Union in Portland, Oregon, and in the Whitney Biennial Spring, 2014. A limited press edition of Tom Tit Tot (the word collages which amount to a series poem) with art work by R.H. Quaytman has just been published by MoMA in New York, and Spontaneous Particulars:The Telepathy of Archives, (2014) published by Christine Burgin and New Directions. Eliot Weinberger is an essayist and translator, the editor of The New Directions Anthology of Classical Chinese Poetry, and the series editor of Calligrams: Writings from and on China (New York Review Books and Chinese University of Hong Kong Press). He lives in New York City.

A Preview for this title is currently not available.
More Books By Susan Howe
View All