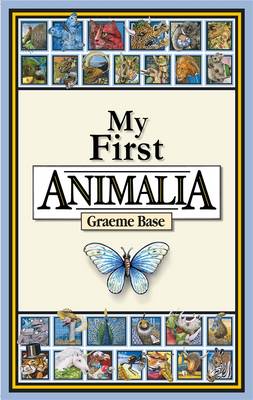 Description - My First Animalia by Graeme Base

Within the pages of this book, you may discover, if you look, beyond the spell of written words, a hidden land of beast and birds.

But there's so much to find and name - Let's start off with a smaller game. Just four for now - some big, some small. Now off you go to find them all!

Animalia was first published in 1986, immediately capturing the imagination of children and adults around the world. It has now achieved classic status with global sales of over three million copies.

My First Animalia celebrates the magic of Animalia in a playful introductory format for the very young, specially created by Graeme Base.

So turn the pages, lift the flaps and rediscover the world of Animalia through fresh eyes - it's the alphabet as only Graeme Base knows how!

Book Reviews - My First Animalia by Graeme Base

» Have you read this book? We'd like to know what you think about it - write a review about My First Animalia book by Graeme Base and you'll earn 50c in Boomerang Bucks loyalty dollars (you must be a Boomerang Books Account Holder - it's free to sign up and there are great benefits!)

Graeme Base is one of the world's leading creators of picture books. His alphabet book Animalia, received international acclaim when it was first published in 1986, and has achieved classic status with worldwide sales approaching three million copies. It has now inspired an animated TV series. Other favourites by Graeme Base include The Eleventh Hour, My Grandma Lived in Gooligulch, The Sign of the Seahorse, The Discovery of Dragons, The Worst Band in the Universe,The Waterhole (and The Waterhole Board Book), Jungle Drums and Uno's Garden. In 2007 this last title featured in six major awards and was winner of three- Speech Pathology Book of the Year, younger readers; The Green Earth Book, USA; The Wilderness Society Environment Award. In 2003, his first novel for young readers, TruckDogs, was released. It was short-listed for the Children's Book Council of Australia Book of the Year Awards the following year. In 2009 Graeme produced the the fascinating, beautiful and challenging book Enigma; can you crack the code? Graeme's most recent book is The Last King of Angkor Wat. Graeme lives in Melbourne with his artist wife, Robyn, and their three children - James, Kate and Will. Visit graemebase.com

The Extra-Special Helper
Sally Rippin
$6.63 $7.99
More Books By Graeme Base
View All