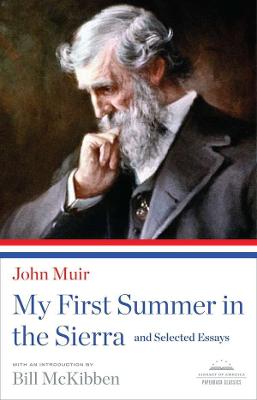 My First Summer in the Sierra and Selected Essays

Describing his spiritual awakening amid the mountains and valleys of central California, John Muir's My First Summer in the Sierra is, like Walden, one of the seminal texts in the literature of the American environment. It is presented here with an introduction by writer and activist Bill McKibben and related essays about Yosemite, the Hetch Hetchy Valley, and other wonders of the Sierra Nevada.

Buy My First Summer in the Sierra and Selected Essays by John Muir from Australia's Online Independent Bookstore, Boomerang Books.

» Have you read this book? We'd like to know what you think about it - write a review about My First Summer in the Sierra and Selected Essays book by John Muir and you'll earn 50c in Boomerang Bucks loyalty dollars (you must be a Boomerang Books Account Holder - it's free to sign up and there are great benefits!)

John Muir (1838-1914) was born in Scotland. In 1849 he emigrated with his family to the United States, where he later enrolled in courses in chemistry, geology, and botany at the University of Wisconsin. Muir made extended journeys throughout America, observing both scientifically and enthusiastically the beauties of the wilderness. The Mountains of California, his first book, was published in 1894. He eventually settled in California, where he became an impassioned leader of the forest conservation movement. His writings include Our National Parks (1901), My First Summer in the Sierra (1911), The Yosemite (1912), Travels in Alaska (1915), A Thousand-Mile Walk to the Gulf (1916), and Steep Trails (1918).Bill McKibben is the author of The End of Nature, and The Age of Missing Information. He is a frequent contributor to such publications as Outside, The New York Times, and The New York Review of Books, and a former staff writer at the New Yorker.

A Preview for this title is currently not available.
More Books By John Muir
View All

Original Sanskrit Texts on the Origin and History of the People of India, Their Religion and Institutions: The Vedas: Opinions of Their Authors and of Later Indian Writers on Their Origin, Inspiration, and Authority. 1868
$93.01 $103.34