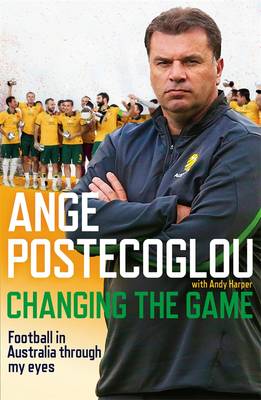 Description - My Game by Ange Postecoglou

Ange Postecoglou has been at the centre of Australian football for more than thirty years. In this book, he shows us the game through his eyes, from the changing room to the boardroom, to reveal how Australia must boldly reimagine its place in the world.

Ange Postecoglou has been at the centre of Australian football for more than thirty years. In this book, he shows us the game through his eyes, from the changing room to the boardroom, to reveal how Australia must boldly reimagine its place in the world.

From his playing days with South Melbourne in the 1980s to coaching the Socceroos to victory in the 2015 Asian Cup, Ange Postecoglou's uncompromising commitment to success has coincided with the incredible rise of football in this country.

He won the old National Soccer League as a player and a coach. Now that Australian football is reaching new heights, Ange is again at the forefront- he's won back-to-back A-League titles, led the Brisbane Roar to the longest unbeaten run in any code, and the national team to the winner's podium. He's a man with strong opinions about how to play and lead.

Ange's story is one of fostering a culture of success, and turning history - or precedent - on its head. He candidly relays key moments and meetings in his life, reflecting on how these have shaped his beliefs and practices, and gives frank views on where the game is currently going right and wrong. What's revealed is a bold and impassioned account of the game he loves.

Changing the Game is a privileged glimpse inside the mind of a living legend.

» Have you read this book? We'd like to know what you think about it - write a review about My Game book by Ange Postecoglou and you'll earn 50c in Boomerang Bucks loyalty dollars (you must be a Boomerang Books Account Holder - it's free to sign up and there are great benefits!)

Ange Postecoglou played 193 senior games for South Melbourne between 1984 and 1993. He has coached South Melbourne, Australia's youth teams, Brisbane Roar, Melbourne Victory and the Socceroos. As a player and coach he's won four National Soccer League titles and two A-League championships, including the longest undefeated streak in Australia - 36 matches with the Brisbane Roar. Postecoglou was appointed Australia's national coach in October 2013 on a five-year deal, taking them to the 2014 FIFA World Cup and now into qualifying for the 2018 World Cup.