My Hamster is a Genius

Description - My Hamster is a Genius by Dave Lowe

'My mum had a long history of unusual punishments . . . And now, thanks to the sticky-taping incident, she announced that she was buying me a pet.'

Meet nine-year-old Benjamin Jinks and his grumpy hamster, Jasper Stinkybottom. Benjamin is a very normal boy who hates maths. Stinky is a brilliant hamster, who likes carrots. Together they are an unstoppable team!
But can they overcome the evil scheming of Ben's maths teacher, Beardy McCreedy?

Buy My Hamster is a Genius by Dave Lowe from Australia's Online Independent Bookstore, Boomerang Books.

Other Editions - My Hamster is a Genius by Dave Lowe 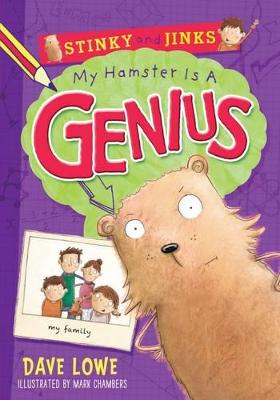 Book Reviews - My Hamster is a Genius by Dave Lowe

» Have you read this book? We'd like to know what you think about it - write a review about My Hamster is a Genius book by Dave Lowe and you'll earn 50c in Boomerang Bucks loyalty dollars (you must be a Boomerang Books Account Holder - it's free to sign up and there are great benefits!)

Dave Lowe grew up in Dudley in the West Midlands, and now lives in Brisbane, Australia, with his wife and two daughters. He spends his days writing books, drinking lots of tea, and treading on Lego that his daughters have left lying around. Dave's STINKY AND JINKS books follow the adventures of a nine-year-old boy called Ben, and Stinky, Ben's genius pet hamster. (When Dave was younger, he had a pet hamster too. Unlike Stinky, however, Dave's hamster didn't often help him with his homework.) Find Dave online at @daveloweauthor or www.davelowebooks.com

A Preview for this title is currently not available.
More Books By Dave Lowe
View All