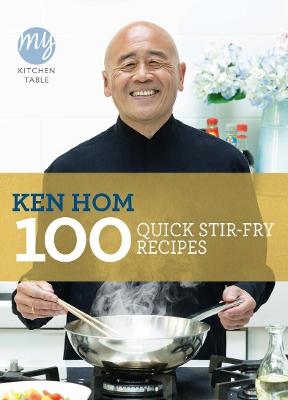 Ken Hom is the nation's favourite Chinese chef and this is his collection of his best 100 stir-fry recipes.From chicken recipes to vegetarian, healthy to recipes for entertaining friends, curries to salads, modern and traditional, plus appetisers, snacks and side dishes, this book offers an amazing range of taste, ingredients and style - all made in the wok.

» Have you read this book? We'd like to know what you think about it - write a review about My Kitchen Table: 100 Quick Stir-fry Recipes book by Ken Hom and you'll earn 50c in Boomerang Bucks loyalty dollars (you must be a Boomerang Books Account Holder - it's free to sign up and there are great benefits!)

Ken Hom is an internationally regarded authority on Chinese and Oriental cooking, and has 25 years' experience as a television chef. He began his culinary career in his uncle's Chicago restaurant at the age of eleven, before eventually moving on to teach at California's Culinary Academy. Following a spell studying gastronomy in France, Ken presented his first TV series in 1984 - Ken Hom's Chinese Cookery on the BBC. ince then, he has written over 30 cookery books and presented numerous internationally distributed television series, and has launched a massively successful range of woks and accessories, with over 7 millions woks sold in 59 countries to date. In 2008 he was awarded an honorary doctorate from Oxford Brookes University for 'outstanding success within the international food world', and in 2009 was awarded an honorary OBE for 'services to the culinary arts' and in recognition of the social and historical impact of his role in the UK's adoption of Chinese cuisine. His latest cookbook, The Complete Chinese Cookbook is published in January 2011

A Preview for this title is currently not available.
More Books By Ken Hom
View All