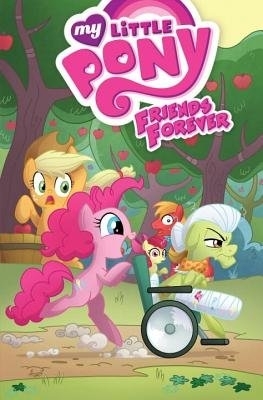 Four more tales of friends and fun! Rainbow Dash wakes up to discover that her wings have vanished, so it's up to the relatively newly-winged Twilight to help her friend. Then, Shining Armor will have his hooves full when Prince Blueblood gets involved in a sensitive diplomatic mission. Plus, it's cider season and things are busy at Sweet Apple Acres! Unfortunately, Granny has broken her hip and Pinkie Pie is called in to look after the cantankerous elder! And finally, the Cutie Mark Crusaders visit Canterlot. When their appointed guardian is summoned away, it's up to Princess Luna to watch over the precocious fillies.

» Have you read this book? We'd like to know what you think about it - write a review about My Little Pony Friends Forever Volume 7 book by Barbara Kesel and you'll earn 50c in Boomerang Bucks loyalty dollars (you must be a Boomerang Books Account Holder - it's free to sign up and there are great benefits!)

Jeremy Whitleyais an American comic book writer and artist, known as the creator of the series Princeless. In 2011 Whitley joined Action Lab Entertainment as their official Director of Marketing and head of PR, where he handles solicitations, reviews, press releases, and interviews. Jeremy has also co-written licensed properties from the publisher including the 2012 digital mini-series "GlobWorld" and the ongoing series "NFL RushZone". In addition to his original creations, he has also been a regular writer for IDW'saMy Little Pony- Friendship is MagicaandaMy Little Pony- Friends Forever. Christina Riceais a librarian, archivist, author, wife and mother. Her first book,aAnn Dvorak- Hollywood's Forgotten Rebelawas published by the University Press of Kentucky in November 2013 and she has written multiple issues of theaMy Little Ponyacomic book series (IDW). She lives in Los Angeles with her husband, writer Joshua Hale Fialkov, their daughter, two dogs, and a disgruntled cat. Tony Fleecsais the writer and artist ofaIn My Lifetime, an autobiographical comic book. First published in 2006,a'Lifetimeawas an immediate critical success, featured twice inaWizard Magazine, in theaComic Buyer's Guideaand on the Ain't-It-Cool-News.aFleecs has since been a contributor to anthologies including;aPostcards- True Stories that Never Happeneda(nominated for the 2008 Eisner and Harvey awards for best anthology), Boom Studios'aPulp Talesaand C.B. Cebulski'saWonderlost. He and writer, Josh Fialkov, provided theaLi'l FireBreatherabackup stories for Phil Hester's secondaFireBreatheraseries at Image Comics. Last year saw his first work for hire writing work when he scripted the comi

A Preview for this title is currently not available.
More Books By Barbara Kesel
View All