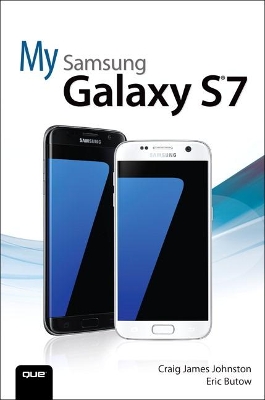 Full-colour, step-by-step tasks walk you through getting and keeping your Samsung Galaxy S7 or S7 edge working just the way you want. Learn how to

» Have you read this book? We'd like to know what you think about it - write a review about My Samsung Galaxy S7 book by Craig Johnston and you'll earn 50c in Boomerang Bucks loyalty dollars (you must be a Boomerang Books Account Holder - it's free to sign up and there are great benefits!)

Craig James Johnston has been involved with technology since his high school days at Glenwood High in Durban, South Africa, when his school was given some Apple ][ Europluses. From that moment, technology captivated him, and he has owned, supported, evangelized, and written about it. Craig has been involved in designing and supporting large-scale enterprise networks with integrated email and directory services since 1989. He has held many different IT-related positions in his career, ranging from sales support engineer to mobile architect for a 40,000-smartphone infrastructure at a large bank. You can see Craig's previously published work in his books Professional BlackBerry, My iMovie, and many other My series books that cover devices by BlackBerry, Palm, HTC, Motorola, Samsung, and Google. Craig also enjoys high-horsepower, high-speed vehicles and tries very hard to keep to the speed limit while driving them. Originally from Durban, South Africa, Craig has lived in the United Kingdom, the San Francisco Bay Area, and New Jersey, where he now lives with his wife, Karen, and a couple of cats. Craig would love to hear from you. Feel free to contact Craig about your experiences with My Samsung Galaxy S7 at http://www.CraigsBooks.info. All comments, suggestions, and feedback-both positive and negative-are welcome. Eric Butow began writing books in 2000 when he wrote Master Visually Windows 2000 Server. Since then, Eric has authored or coauthored 26 other books. Those books include Addison-Wesley's User Interface Design for Mere Mortals, Amacom's How to Succeed in Business Using LinkedIn, Wiley Publishing's Droid Companion, Wiley Publishing's Google Glass For Dummies, Que Publishing's Blogging to Drive Business, Second Edition, and Que Publishing's My Samsung Galaxy Tab S2. Eric lives in Jackson, California. He has a master's degree in communication from California State University, Fresno, and is the owner of Butow Communications Group (BCG), an online marketing ROI improvement firm. Website: http://butow.net LinkedIn: http://linkedin.com/in/ebutow

A Preview for this title is currently not available.
More Books By Craig Johnston
View All