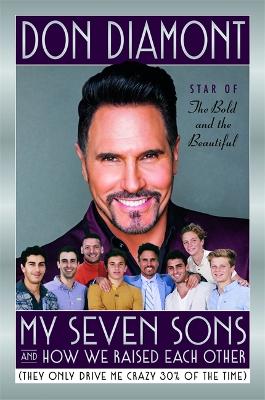 My Seven Sons and How We Raised Each Other

Don Diamont's MY SEVEN SONS AND HOW WE RAISED EACH OTHER is a fatherhood book for today's modern, blended family; a dude book that doesn't shy away from an emotional body slam and a giftable Dad book that also functions as a love song to a magnificent Mom.With humor and compassion, Don takes the readers on a rollercoaster ride from the depths and sorrow of the passing of his own father and brother, to the heights of Hollywood and global glam, to becoming a father himself and the unlikely assemblage of his blended brood. Only two of his seven sons are his biological children. Looking back on the men who raised, coached and mentored him, Diamont speaks candidly about the powerful lessons he's learned. Looking forward, as his seven boys become men, he reflects on the manly art of fatherhood and leaves us with a winning portrait of an American family in a world where the concept of family is being redefined.

Buy My Seven Sons and How We Raised Each Other by Don Diamont from Australia's Online Independent Bookstore, Boomerang Books.

» Have you read this book? We'd like to know what you think about it - write a review about My Seven Sons and How We Raised Each Other book by Don Diamont and you'll earn 50c in Boomerang Bucks loyalty dollars (you must be a Boomerang Books Account Holder - it's free to sign up and there are great benefits!)

DON DIAMONT is an actor and father of seven sons. Called a "Daytime Deity" by Soap In-Depth magazine, he originated iconic characters on both The Young and the Restless and Bold and the Beautiful. Committed to his family first and foremost, Don spends his downtime with his wife, former TV star and super-powered LA real estate agent, Cindy Ambuehl, working out, grilling in the back yard, and keeping tabs on the young men of "Team Testosterone": Drew, Lauren, Sasha, Alexander, Luca, Anton and Davis.