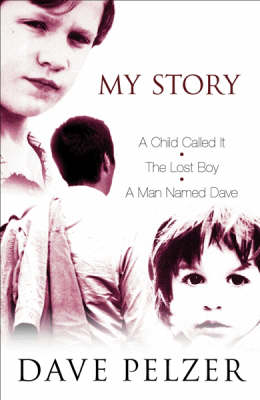 Description - My Story: "A Child Called it", "The Lost Boy", "A Man Named Dave" by Dave Pelzer

A Child Called 'It' is Dave Pelzer's story is of a child beaten and starved by his emotionally unstable, alcoholic mother: a mother who played tortuous, unpredictable games that left one of her three sons nearly dead. No longer considered a son, or a boy, but an 'it', Dave had to learn how to play these games in order to survive. His bed was an old army cot in the basement and when he was allowed food it was scraps from the dogs' bowl. Throughout, Dave kept alive the dream of finding a family who would love and care for him. This is an inspirational look at the horrors of child abuse and the steadfast determination of one child to survive despite the odds. The Lost Boy The harrowing but ultimately uplifting true story of Dave's journey through the foster-care system in search of a family who will love him. A Man Named Dave The gripping conclusion to this inspirational trilogy. With extraordinary generosity of spirit, Dave takes us on a journey into his past. At last he confronts his father and ultimately his mother. Finally, Dave finds the courage to break the chains of the past and learn to love, trust and live for the future.

Other Editions - My Story: "A Child Called it", "The Lost Boy", "A Man Named Dave" by Dave Pelzer Book Reviews - My Story: "A Child Called it", "The Lost Boy", "A Man Named Dave" by Dave Pelzer

» Have you read this book? We'd like to know what you think about it - write a review about My Story: "A Child Called it", "The Lost Boy", "A Man Named Dave" book by Dave Pelzer and you'll earn 50c in Boomerang Bucks loyalty dollars (you must be a Boomerang Books Account Holder - it's free to sign up and there are great benefits!)


A Preview for this title is currently not available.
More Books By Dave Pelzer
View All