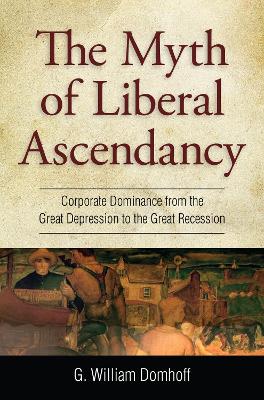 The Myth of Liberal Ascendancy

Corporate Dominance from the Great Depression to the Great Recession

Description - The Myth of Liberal Ascendancy by G. Williams Domhoff

Based on new archival research, G. Williams Domhoff challenges popular conceptions of the 1930's New Deal. Arguing instead that this period was one of increasing corporate dominance in government affairs, affecting the fate of American workers up to the present day. While FDR's New Deal brought sweeping legislation, the tide turned quickly after 1938. From that year onward nearly every major new economic law passed by Congress showed the mark of corporate dominance. Domhoff accessibly portrays documents of the Committee's vital influence in the halls of government, supported by his interviews with several of its key employees and trustees. Domhoff concludes that in terms of economic influence, liberalism was on a long steady decline, despite two decades of post-war growing equality, and that ironically, it was the successes of the civil rights, feminist, environmental, and gay-lesbian movements-not a new corporate mobilisation-that led to the final defeat of the liberal-labour alliance after 1968.

Other Editions - The Myth of Liberal Ascendancy by G. Williams Domhoff 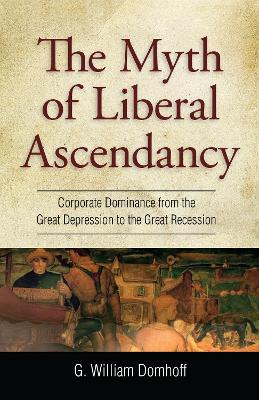 » Have you read this book? We'd like to know what you think about it - write a review about Myth of Liberal Ascendancy book by G. Williams Domhoff and you'll earn 50c in Boomerang Bucks loyalty dollars (you must be a Boomerang Books Account Holder - it's free to sign up and there are great benefits!)

G. Williams Domhoff is Professor Emeritus at UC-Santa Cruz. He is the author of Who Rules America (6th edition (2009) and The New CEOs: Women, African American, Latino, and Asian American Leaders of Fortune 500 Companies (2011).

A Preview for this title is currently not available.
More Books By G. Williams Domhoff
View All