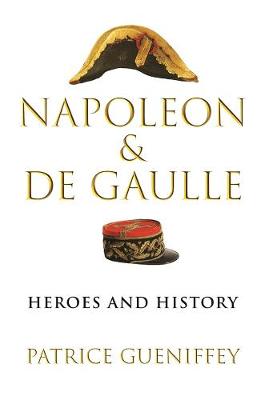 One of France's most famous historians compares two exemplars of political and military leadership to make the unfashionable case that individuals, for better and worse, matter in history.

Historians have taught us that the past is not just a tale of heroes and wars. The anonymous millions matter and are active agents of change. But in democratizing history, we have lost track of the outsized role that individual will and charisma can play in shaping the world, especially in moments of extreme tumult. Patrice Gueniffey provides a compelling reminder in this powerful dual biography of two transformative leaders, Napoleon Bonaparte and Charles de Gaulle.

Both became national figures at times of crisis and war. They were hailed as saviors and were eager to embrace the label. They were also animated by quests for personal and national greatness, by the desire to raise France above itself and lead it on a mission to enlighten the world. Both united an embattled nation, returned it to dignity, and left a permanent political legacy?in Napoleon's case, a form of administration and a body of civil law; in de Gaulle's case, new political institutions. Gueniffey compares Napoleon's and de Gaulle's journeys to power; their methods; their ideas and writings, notably about war; and their postmortem reputations. He also contrasts their weaknesses: Napoleon's limitless ambitions and appetite for war and de Gaulle's capacity for cruelty, manifested most clearly in Algeria.

They were men of genuine talent and achievement, with flaws almost as pronounced as their strengths. As many nations, not least France, struggle to find their soul in a rapidly changing world, Gueniffey shows us what a difference an extraordinary leader can make.

» Have you read this book? We'd like to know what you think about it - write a review about Napoleon and de Gaulle: Heroes and History book by Patrice Gueniffey and you'll earn 50c in Boomerang Bucks loyalty dollars (you must be a Boomerang Books Account Holder - it's free to sign up and there are great benefits!)


A Preview for this title is currently not available.
More Books By Patrice Gueniffey
View All