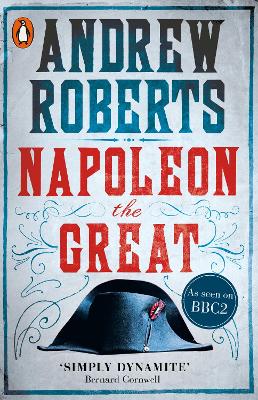 Napoleon Bonaparte lived one of the most extraordinary of all human lives, transforming France and Europe in the space of just twenty years from 1795 to 1815. After seizing power in a coup d'etat he ended the corruption and incompetence into which the Revolution had descended. In a series of dazzling battles he reinvented the art of warfare; in peace, he completely remade the laws of France and modernised her systems of education and administration. The impossibility of defeating his most persistent enemy, Great Britain, led him to make draining and ultimately fatal expeditions into Spain and Russia, where half a million Frenchmen died and his Empire began to unravel. More than any other modern biographer, Andrew Roberts conveys Napoleon's tremendous energy and the attractiveness of his personality, even to his enemies. As one French sergeant-major wrote, 'No-one who has not experienced it can have any idea of the enthusiasm that burst forth among the half-starved, exhausted soldiers when the Emperor was there in person. If all were demoralised and he appeared, his presence was like an electric shock. All shouted 'Vive l'Empereur!' and everyone charged blindly into the fire.' The reader of this biography will understand why this was so. 'Truly a Napoleonic triumph of a book, irresistibly galloping with the momentum of a cavalry charge . . . Here, at last, is the full biography.' Simon Sebag Montefiore, Evening Standard, Books of the Year 'Masterly . . . huge, rich, deep, witty, humane, gloriously enjoyable.' Dan Jones, Daily Telegraph 'Brilliant . . . Roberts brings alive the emperor's attractive character, his intellectual fire and, above all, his astonishing personal dynamism.' Ben MacIntyre, Sunday Times, Books of the Year 'Marvellously readable, gripping, fast-paced . . . sets out for a new generation exactly why he mattered and will continue to matter.' Mark Mazower, Guardian 'A brilliant example of 'great man' history, brimming with personality and the high-octane Bonapartist spirit.' John Bew, New Statesman, Books of the Year 'Fantastic, rich in anecdote . . . Roberts is a masterly storyteller.' Max Hastings, Wall Street Journal

» Have you read this book? We'd like to know what you think about it - write a review about Napoleon the Great book by Andrew Roberts and you'll earn 50c in Boomerang Bucks loyalty dollars (you must be a Boomerang Books Account Holder - it's free to sign up and there are great benefits!)

Andrew Roberts is a biographer and historian of international renown whose books include Salisbury: Victorian Titan (winner, the Wolfson Prize for History); Masters and Commanders; and The Storm of War, which reached No. 2 on the Sunday Times bestseller list. Roberts is a Fellow of the Royal Societies of Literature and Arts. He appears regularly on British television and radio and writes for the Sunday Telegraph, Spectator, Literary Review, Mail on Sunday and Daily Telegraph.