Narratives of War: Remembering and Chronicling Battle in Twentieth-Century Europe

Narratives of War considers the way war and battle are remembered and narrated across space and time in Europe in the twentieth century.

The book reflects on how narratives are generated and deployed, and on their function as coping mechanisms, means of survival, commemorative gestures, historical records and evidence. The contributions address such issues as the tension and discrepancy between memory and the official chronicling of war, the relationship between various individuals' versions of war narratives and the ways in which events are brought together to serve varied functions for the narrators and their audiences. Drawing upon the two World Wars, the Spanish Civil War and the ex-Yugoslav wars, and considering narrative genres that include film, schoolbooks, novels, oral history, archives, official documents, personal testimony and memoirs, readers are introduced to a range of narrative forms and examples that highlight the complexity of narrative in relation to war.

Approached from a multidisciplinary perspective, and taken together, analysis of these narratives contributes to our understanding of the causes, experience, dynamics and consequences of war, making it the ideal book for those interested in twentieth-century war history and the history of memory and narrative.

Other Editions - Narratives of War: Remembering and Chronicling Battle in Twentieth-Century Europe by Nanci Adler 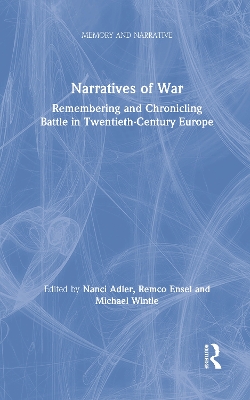 » Have you read this book? We'd like to know what you think about it - write a review about Narratives of War: Remembering and Chronicling Battle in Twentieth-Century Europe book by Nanci Adler and you'll earn 50c in Boomerang Bucks loyalty dollars (you must be a Boomerang Books Account Holder - it's free to sign up and there are great benefits!)


A Preview for this title is currently not available.
More Books By Nanci Adler
View All

Narratives of War: Remembering and Chronicling Battle in Twentieth-Century Europe
$249.48 $252.00