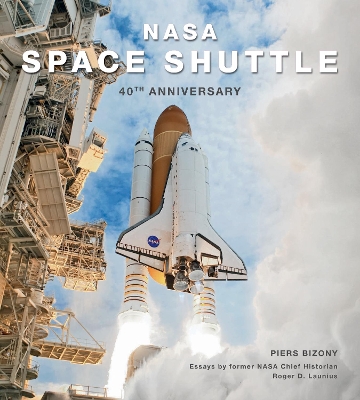 Officially known as the Space Transportation System (STS), the Space Shuttle program operated from 1981 to 2011. During that time, five Shuttle systems took part in 135 missions under the operation of NASA. This approach-namely reusable spacecraft-revolutionized space exploration. NASA Space Shuttle: 40th Anniversary traces the STS's 30-year operational history. Essays by former NASA chief historian Roger Launius are accompanied by a collection of incredible Shuttle photography and imagery mined from the depths of NASA's archives by aerospace historian Piers Bizony-all of it presented in large-format color. Readers will witness the pre-1981 evolution, the missions, astronauts, ground personnel and infrastructure, and amazing accomplishments of the Shuttle program and its spacecraft: Columbia, Challenger, Discovery, Atlantis, and Endeavour.

From the launch site at Cape Kennedy, Florida, to mission control in Houston, Texas, to the landing site at Edwards Air Force Base, all aspects of Shuttle operation are covered, including key roles in efforts such as the Hubble Telescope and International Space Station, as well as the tragedies of Challenger and Columbia disasters. Every carefully chosen image in NASA Space Shuttle: 40th Anniversary tells an aspect of the Shuttle story. The resulting book is not only a unique view of a key chapter of NASA history-it's a compelling collection of stunning NASA photography and illustrations.

» Have you read this book? We'd like to know what you think about it - write a review about NASA Space Shuttle: 40th Anniversary book by Roger D. Launius and you'll earn 50c in Boomerang Bucks loyalty dollars (you must be a Boomerang Books Account Holder - it's free to sign up and there are great benefits!)


A Preview for this title is currently not available.
More Books By Roger D. Launius
View All

The History of Space Exploration: Discoveries from the Ancient World to the Extraterrestrial Future
$40.99 $49.99