A giant turkey is on the loose! Nate, the great detective, and his dog, Sludge, hear the news on the radio. But Nate doesn't want to take a case that everyone in town is on. Not even when Claude claims that he saw the turkey, then lost him in the woods. He holds up a turkey feather to prove it. Now Sludge wants the case. Claude wants Sludge, and off they go.Miles away... Nate's cousin Olivia Sharp - herself a detective - hears about the missing turkey on TV. Before he can say gobble, gobble, Olivia appears on Nate's doorstep; and just as quickly, she's off hunting for the feathered creature.It looks as if Nate can sit this case out... until he turns on his TV and a picture of the turkey flashes on. Suddenly Nate is moving just as fast! Now Nate, Olivia, Sludge, and Claude are all in pursuit of the turkey. Are two (or more) detectives better than one? From talking turkey to stalking turkey - will every detective come out a winner? 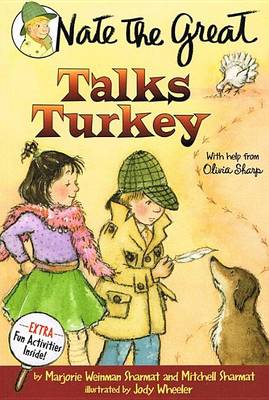 » Have you read this book? We'd like to know what you think about it - write a review about Nate The Great Talks Turkey book by Marjorie Weinman Sharmat and you'll earn 50c in Boomerang Bucks loyalty dollars (you must be a Boomerang Books Account Holder - it's free to sign up and there are great benefits!)

MARJORIE WEINMAN SHARMAT has written more than 130 books for children and young adults, as well as movie and TV novelizations. Her books have been translated into twenty-four languages. The award-winning Nate the Great series, hailed in Booklist as "groundbreaking," was inspired by her father, Nathan Weinman. As a child in Portland, Maine, her first job was counting boxes at the real-life Weinman Brothers, a wholesale and manufacturing business owned by her father and uncle. MITCHELL SHARMAT, a graduate of Harvard University, has written numerous picture books, easy readers, and novels, and is a contributor to many textbook reading programs. He is best known for the classic Gregory, the Terrible Eater, a Reading Rainbow Feature Selection and a New York Times Critics' Pick. The idea for Nate the Great Talks Turkey came to him when he heard a radio news flash describing the predicament of a family trapped inside their car by an aggressive turkey in a supermarket parking lot. In Mitchell Sharmat's honor, The Sharmat Collection, displaying the books he's written, was established at the Harvard Graduate School of Education by the Munroe C. Gutman Library. JODY WHEELER developed a greater than average interest in children's books at an early age, having been influenced and encouraged by her great-aunt Opal Wheeler, a prolific writer of books for young readers in the 1950s. Since being trained as a fine artist and educator, Ms. Wheeler has enjoyed working on a variety of projects ranging from picture books to educational texts and magazines, and from greeting cards to coloring books. Jody Wheeler divides her time between Manhattan and Siesta Key, Florida.