Russia, one of the most ethno-culturally diverse countries in the world, provides a rich case study on how globalisation and associated international trends are disrupting, and causing the radical rethinking of approaches to, inter-ethnic cohesion. The book highlights the importance of television broadcasting in shaping national discourse and the place of ethno-cultural diversity within it. It argues that television's role here has been reinforced, rather than diminished, by the rise of new media technologies. Through an analysis of a wide range of news and other television programmes, the book shows how the covert meanings of discourse on a particular issue can diverge from the overt significance attributed to it, just as the impact of that discourse may not conform with the original aims of the broadcasters. The book discusses the tension between the imperative to maintain security through centralised government and overall national cohesion that Russia shares with other European states, and the need to remain sensitive to, and to accommodate, the needs and perspectives of ethnic minorities and labour migrants. It compares the increasingly isolationist popular ethnonationalism in Russia, which harks back to "old-fashioned" values, with the similar rise of the Tea Party in the United States and the UK Independence Party in Britain. Throughout, this extremely rich, well-argued book complicates and challenges received wisdom on Russia's recent descent into authoritarianism. It points to a regime struggling to negotiate the dilemmas it faces, given its Soviet legacy of ethnic particularism, weak civil society, large native Muslim population and overbearing, yet far from entirely effective, state control of the media.

Other Editions - Nation, Ethnicity and Race on Russian Television by Stephen Hutchings 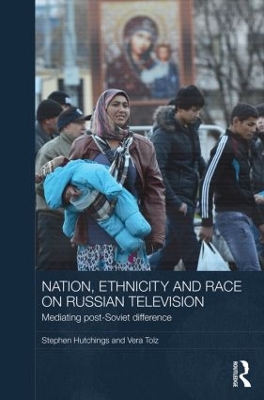 » Have you read this book? We'd like to know what you think about it - write a review about Nation, Ethnicity and Race on Russian Television book by Stephen Hutchings and you'll earn 50c in Boomerang Bucks loyalty dollars (you must be a Boomerang Books Account Holder - it's free to sign up and there are great benefits!)

A Preview for this title is currently not available.
More Books By Stephen Hutchings
View All