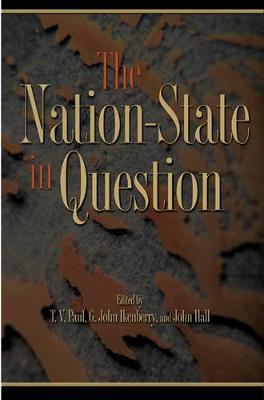 The Nation-State in Question

Description - The Nation-State in Question by T. V. Paul

Has globalization forever undermined the state as the mighty guarantor of public welfare and security? In the 1990s, the prevailing and even hopeful view was that it had. The euphoria did not last long. Today the "return of the state" is increasingly being discussed as a desirable reality. This book brings together a group of scholars from comparative politics, international relations and sociology to systematically reassess - through a historical lens that moves beyond the standard focus on the West - state-society relations and state power at the dawn of the 21st century. The contributors examine the sources and forms of state power in light of a range of welfare and security needs in order to tell us what states can do today. They assess the extent to which international social forces affect states and the capacity of states to adapt in specific issue areas. Their striking conclusion is that states have continued to be pivotal in diverse areas such as nationalism, national security, multiculturalism, taxation and industrial relations. Offering insights on the changing contours of state power, "The Nation-State in Question" should be of interest to social scientists, students and policymakers alike. John Hall's introduction is followed by chapters by Peter Baldwin, John Campbell, Francesco Duina, Grzegorz Ekiert, Jeffrey Herbst, Christopher Hood, Anatoly Khazanov, Brendan O'Leary, T.V. Paul, Bernard Yack, Rudra Sil and Minxin Pei. The conclusion is by John Ikenberry.

Other Editions - The Nation-State in Question by T. V. Paul Book Reviews - The Nation-State in Question by T. V. Paul

» Have you read this book? We'd like to know what you think about it - write a review about Nation-State in Question book by T. V. Paul and you'll earn 50c in Boomerang Bucks loyalty dollars (you must be a Boomerang Books Account Holder - it's free to sign up and there are great benefits!)

T. V. Paul, Professor of Political Science at McGill University, has published six books including "India in the World Order". G. John Ikenberry, Peter F. Krogh Professor of Geopolitics and Global Justice at Georgetown University, is the author of "After Victory" (Princeton), which received the Robert L. Jervis and Paul W. Schroeder Prize for 2002 from the American Political Science Association as the best book in the area of international history and politics. John Hall is James McGill Professor of Sociology at McGill University. His books include "Is America Breaking Apart?" (Princeton).