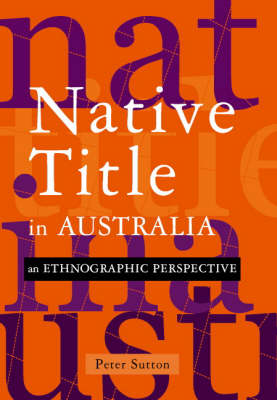 Australian law recognised the existence of native title in the Mabo decision of 1992. Since then, many indigenous people have worked with anthropologists and other scholars in recording and presenting the factual bases of their native title claims, and anthropologists have also acted as consultants to non-claimant parties. In this context, the legal and bureaucratic advisers of claimants and other parties often encounter the complexities of indigenous land and marine tenure for the first time, or at least in a new way. In this book Peter Sutton sets out the fundamental anthropological issues involved in native title in Australia, focusing on the kinds of rights that are held in traditional 'countries', the types of groups whose members have been found to enjoy those rights, and how such groups have changed over 200 years of post-colonial history.

Other Editions - Native Title in Australia by Peter Sutton » Have you read this book? We'd like to know what you think about it - write a review about Native Title in Australia book by Peter Sutton and you'll earn 50c in Boomerang Bucks loyalty dollars (you must be a Boomerang Books Account Holder - it's free to sign up and there are great benefits!)

Professor Peter Sutton is an Australian Research Council Fellow at the University of Adelaide and the South Australian Museum, and an Honorary Research Fellow at the Institute of Archaeology, University College London. He is an anthropologist and linguist. He has lived and worked with Aboriginal people in remote areas of Cape York Peninsula and the Northern Territory, but also in urban and rural centres, since 1969. Professor Sutton has assisted with over fifty indigenous land claim cases in many different parts of Australia since 1979. He is an author or editor of eleven books and has published over a hundred academic and other papers, mainly in the fields of Aboriginal land tenure, languages and art, and indigenous policy.

A Preview for this title is currently not available.
More Books By Peter Sutton
View All