Nature's Place as a Cultural Chameleon: The Case of Uluru (Ayers Rock)

Uluru (Ayers Rock) is an extraordinary phenomenon--a distinctive and unique place of Nature, constructed from different layers of nature. The infrastructure layer is the Rock itself as imagined independently of cultural gaze, a place in and of itself created over timeless age through geological movement and weathering to what it is today (First-layered Nature). It is a 'natural' place so noticeable that one's imagination is assaulted with images, resulting in multiple natural constructions influenced by cultural and societal background of diverse reactions to the 'naturalness' (Second-layered Nature). From the Indigenous Australian perspective for thousands of years up to contact with non-Aboriginal Australians, the Rock was a lived space and not just as a representational space, whereas non-Aboriginal Australians with their eye for capitalist advancement regard the Rock in terms of nature as commodity. The result of this capitalist 'advancement', has seen the non-Aboriginal Australian nature as commodity of the Rock translate it into a promoted place and space of natural tourist landscape (Third-layered Nature).

From Uluru's interlocking layers and the complexity of multicultural perceptions of the natures there, it is a focus of a contested place and space of worthwhile study. This is because the spatiality of its natures evolving over time mirrors the changing socio-cultural drivers of the wider society and beyond--a colonial/postcolonial melting pot of change, real and imagined, within a remote location far removed from the everyday, showing that even remote nature cannot evade the socio-cultural world's life processes, creating a cultural chameleon of nature.

Other Editions - Nature's Place as a Cultural Chameleon: The Case of Uluru (Ayers Rock) by Richard Michael Head 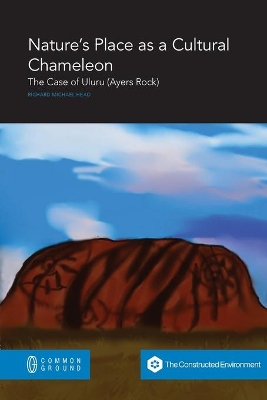 » Have you read this book? We'd like to know what you think about it - write a review about Nature's Place as a Cultural Chameleon: The Case of Uluru (Ayers Rock) book by Richard Michael Head and you'll earn 50c in Boomerang Bucks loyalty dollars (you must be a Boomerang Books Account Holder - it's free to sign up and there are great benefits!)


A Preview for this title is currently not available.
More Books By Richard Michael Head
View All