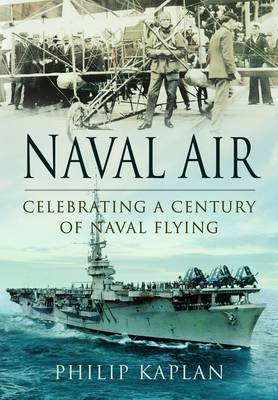 Naval aviation arrived early in the last century in the form of balloons and airships employed by the British Royal Navy for reconnaissance, and interest was stirring in naval circles in a greater aeronautical capacity for the service. Britain's tradition of projecting a global reach through her sea power would, in the view of many, be greatly enhanced by such a capability. Among the first advocates of military aircraft development was British naval minister, Winston Churchill. Over the course of the last century since this point of inception, huge leaps have been made in the design, development, and performance of naval aircraft. This comprehensive account, brought to us by eminent aviation historian Philip Kaplan, details the journey from origin through early development into wartime deployment. This is carried forward through post-war innovations and into modern conflicts such as the Falklands campaign. Attention is paid to the key landmarks of aviation history, such as Taranto, Pearl Harbour, The Doolittle Raid, the Battle of Midway and the Korean campaign. Reference is also paid throughout to the flying aces; the high points in the combat careers of the greatest naval and marine aviators of the past century. Kaplan weaves multiple threads in an effort to produce a comprehensive and detailed history. One of these is the part played by women in the history of flight, detailing a journey characterised by ever-closer involvement at the vanguard of aviation development, showing how societal changes have impacted upon this area in tune with others. Bringing the history up to date, there is a section dedicated to the Helicopter, its varying uses, current disposition and status of the various types in the U.S and British navies. Complemented by a collection of interesting photographs, this is sure to appeal to aviation enthusiasts as well as social historians of the past one hundred years; this isn't just a history of the various aircraft but of the people who got them off the ground and flew them into a new century. AUTHOR: Formerly a book designer with Harper-Row, an Art Director with Playboy and Atlanta magazines, Philip Kaplan has written or co-authored and designed twenty books. 16 page plate section

» Have you read this book? We'd like to know what you think about it - write a review about Naval Air: Celebrating a Century of Naval Flying book by Philip Kaplan and you'll earn 50c in Boomerang Bucks loyalty dollars (you must be a Boomerang Books Account Holder - it's free to sign up and there are great benefits!)