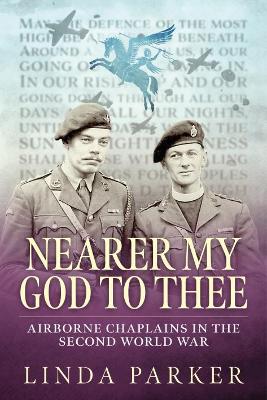 Nearer My God to Thee: Airborne Chaplains in the Second World War

Description - Nearer My God to Thee: Airborne Chaplains in the Second World War by Linda Parker

Nearer My God to Thee examines the full story of the army chaplains who accompanied the airborne forces to all theatres of war between 1942-1945. The chaplains landed with their troops, by parachute and on gliders, mainly behind enemy lines, and shared the dangers and challenges of operations from North Africa, through Sicily, Italy, D-Day and Arnhem to the crossing of the Rhine. In the front line of allied action, the chaplains ministered to their men spiritually and materially, performing acts of courage, aiding medical staff, taking services in difficult circumstance and burying the dead. The book examines the role of the chaplains and their differing experiences. At least two died defending the wounded at dressing stations, several took over leadership of the men in the chaos of battle. At Arnhem chaplains became prisoners of war as they stayed to look after wounded when the allied troops retreated over the Rhine. Chaplains were present with the SAS in North Africa and in France. The book uses hitherto unpublished material including first-hand accounts and letters to tell the dramatic stories of individuals and the multi-faceted work of the airborne chaplains as a whole. Their story is an important part of the narrative of airborne forces in the Second World War. AUTHOR: Linda Parker is a part time teacher and author who was born and educated in Wales but now lives in Oxfordshire. Her main writing and research interests are the military, religious, and social histories of the twentieth century, but she is also very interested in the history of the polar regions. Her various enthusiasms have been combined in several of the books she has written for Helion: The Whole Armour of God (2009) and Shellshocked Prophets (2015), concerning the wartime and inter-war careers of Anglican Army Chaplains; and Ice, Steel and Fire (2013), relating the adventures of British explorers in the Second World War. She is a member of the Royal Historical Society and the Western Front Association. 25 b/w illustrations

» Have you read this book? We'd like to know what you think about it - write a review about Nearer My God to Thee: Airborne Chaplains in the Second World War book by Linda Parker and you'll earn 50c in Boomerang Bucks loyalty dollars (you must be a Boomerang Books Account Holder - it's free to sign up and there are great benefits!)


A Preview for this title is currently not available.
More Books By Linda Parker
View All