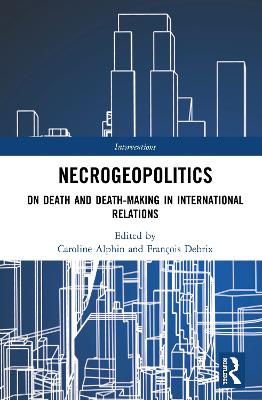 Necrogeopolitics: On Death and Death-Making in International Relations

Description - Necrogeopolitics: On Death and Death-Making in International Relations by Caroline Alphin

Necrogeopolitics: On Death and Death-Making in International Relations brings together a diverse array of critical IR scholars, political theorists, critical security studies researchers, and critical geographers to provide a series of interventions on the topic of death and death-making in global politics.

Contrary to most existing scholarship, this volume does not place the emphasis on traditional sources or large-scale configurations of power/force leading to death in IR. Instead, it details, theorizes, and challenges more mundane, perhaps banal, and often ordinary modalities of violence perpetrated against human lives and bodies, and often contributing to horrific instances of death and destruction. Concepts such as "slow death," "soft killing," "superfluous bodies," or "extra/ordinary" destruction/disappearance are brought to the fore by prominent voices in these fields alongside more junior creative thinkers to rethink the politics of life and death in the global polity away from dominant IR or political theory paradigms about power, force, and violence.

The volume features chapters that offer thought-provoking reconsiderations of key concepts, theories, and practices about death and death-making along with other chapters that seek to challenge some of these concepts, theories, or practices in settings that include the Palestinian territories, Brazilian cities, displaced population flows from the Middle East, sites of immigration policing in North America, and spaces of welfare politics in Scandinavian states.

Book Reviews - Necrogeopolitics: On Death and Death-Making in International Relations by Caroline Alphin

» Have you read this book? We'd like to know what you think about it - write a review about Necrogeopolitics: On Death and Death-Making in International Relations book by Caroline Alphin and you'll earn 50c in Boomerang Bucks loyalty dollars (you must be a Boomerang Books Account Holder - it's free to sign up and there are great benefits!)


A Preview for this title is currently not available.
More Books By Caroline Alphin
View All

Neoliberalism and Cyberpunk Science Fiction: Living on the Edge of Burnout
$249.48 $252.00