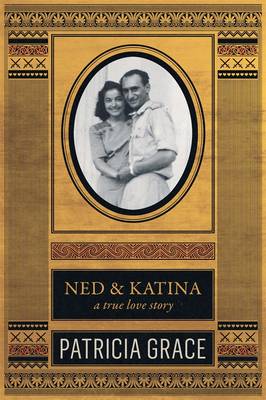 A TRUE STORY OF LOVE IN WARTIME AND IN PEACE.
In Crete during the Second World War a wounded Maori Battalion soldier and a young Cretan woman fall in love when the young infantryman is sheltered by her family.
After marrying in Crete, Ned and Katina come back to live in New Zealand, settling in the Far North. They live a long, rich and happy life together, raising a family and involving themselves in community affairs there and in the Wellington region. Ned dies in 1987, Katina in 1996.
Years later, the whanau of Ned and Katina approached writer Patricia Grace to compile their parents' story. Ned & Katina is the result. This warm, beautifully written true story is impossible to put down.
Also available as an eBook

» Have you read this book? We'd like to know what you think about it - write a review about Ned And Katina: A True Love Story book by Patricia Grace and you'll earn 50c in Boomerang Bucks loyalty dollars (you must be a Boomerang Books Account Holder - it's free to sign up and there are great benefits!)

Patricia Grace is one of New Zealand's most celebrated writers. She has published six novels and seven short story collections, as well as a number of books for children and non-fiction. She won the New Zealand Fiction Award for Potiki in 1987, and was longlisted for the Booker Prize in 2001 with Dogside Story, which also won the Kiriyama Pacific Rim Fiction Prize. Her children's story The Kuia and the Spider won Children's Picture Book of the Year. Patricia was born in Wellington and lives in Plimmerton on ancestral land, in close proximity to her home marae at Hongoeka Bay. Previous novels by Patricia Grace- Mutuwhenua- The Moon Sleeps, Potiki, Cousins, Baby No-eyes, Dogside Story, Tu. Short story collections- Waiariki, The Dream Sleepers and Other Stories, Electric City and Other Stories, Selected Stories, Collected Stories, The Sky People, Small Holes in the Silence. Books for children- The Kuia and the Spider/Te Kuia me te Pungawerewere, Watercress Tuna and the Children of Champion Street/Te Tuna Watakirihi me Nga Tamariki o te Tiriti o Toa, The Trolley, Areta and the Kahawai, Maraea and the Albatrosses. Non-fiction- Wahine Toa, Ned & Katina- a True Love Story.

A Preview for this title is currently not available.
More Books By Patricia Grace
View All