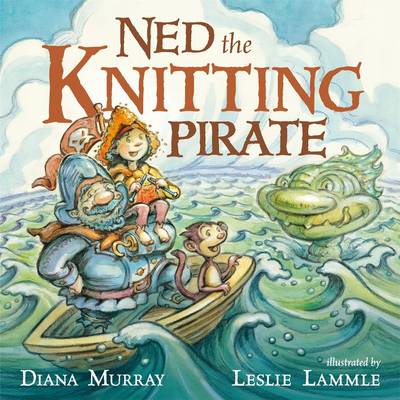 The crew of the pirate ship the Rusty Heap are a fearsome bunch! They're tougher than gristle and barnacle grit. They heave and they ho and they swab and they... knit?

Well, one of them does, at least. Unfortunately for Ned, his knitting doesn't go over well with the captain and crew. But when the briny ocean beast shows up to feast on the Rusty Heap and its crew, maybe Ned's knitting is just the ticket to save the day!

From author Diana Murray and illustrator Leslie Lammle comes a delightfully salty picture book about a pirate boy whose unusual hobby puts him at odds with his friends, but ultimately proves worthwhile. With an appealing angle on individuality, Murray's hilarious characters and Lammle's bright illustrations are sure to win over even the most reluctant landlubber.

» Have you read this book? We'd like to know what you think about it - write a review about Ned the Knitting Pirate book by Diana Murray and you'll earn 50c in Boomerang Bucks loyalty dollars (you must be a Boomerang Books Account Holder - it's free to sign up and there are great benefits!)

Diana Murray is an award-winning poet and picture book author. She is also a novice knitter who hopes to complete her first scarf one day, but nothing thrills her more than weaving a story! Diana grew up in New York City and currently lives in a nearby suburb with her rugged husband, two children, and a motley crew of pets. dianamurray.com Leslie Lammle is a Canadian born picture book author and illustrator. Her illustrations have appeared in the New York Times, the Wall Street Journal, and various magazines. Leslie works out of her kitchen, surrounded by drawings of potential new characters for new books, and is always testing out stories on neighborhood kids. leslielammle.com.