Neither Here, Nor There

Description - Neither Here, Nor There by Bill Bryson

Bill Bryson's first travel book, The Lost Continent, was unanimously acclaimed as one of the funniest books in years. In Neither Here nor There he brings his unique brand of humour to bear on Europe as he shoulders his backpack, keeps a tight hold on his wallet, and journeys from Hammerfest, the northernmost town on the continent, to Istanbul on the cusp of Asia. Fluent in, oh, at least one language, he retraces his travels as a student twenty years before.

Whether braving the homicidal motorists of Paris, being robbed by gypsies in Florence, attempting not to order tripe and eyeballs in a German restaurant or window-shopping in the sex shops of the Reeperbahn, Bryson takes in the sights, dissects the culture and illuminates each place and person with his hilariously caustic observations. He even goes to Liechtenstein.

Buy Neither Here, Nor There by Bill Bryson from Australia's Online Independent Bookstore, Boomerang Books.

Other Editions - Neither Here, Nor There by Bill Bryson 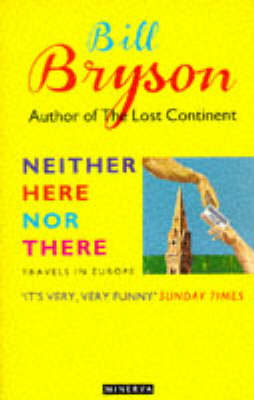 Book Reviews - Neither Here, Nor There by Bill Bryson

» Have you read this book? We'd like to know what you think about it - write a review about Neither Here, Nor There book by Bill Bryson and you'll earn 50c in Boomerang Bucks loyalty dollars (you must be a Boomerang Books Account Holder - it's free to sign up and there are great benefits!)