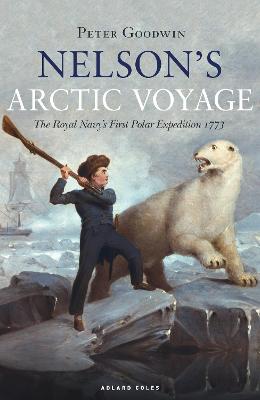 In the summer of 1773 the 14-year old Horatio Nelson took part in an expedition to the Arctic, which came close to ending his naval career before it had begun. The expedition was to find a navigable northern passage between the Atlantic and Pacific, and was supported by the Royal Society and King George III. Two bomb vessels HMS Racehorse and Carcass were fitted out and strengthened under the command of Captain Hon. Constantine Phipps. It was an extremely cold Arctic summer and the ships became locked in ice far from Spitzbergen and were unable to cut their way out until days later when the wind changed and the ice broke up. The ships were extricated and returned home.

On the trip, the young Nelson had command of one of the smaller boats of the ships, a four-oared cutter manned by twelve seamen. In this he helped to save the crew of a boat belonging to the Racehorse from an attack by a herd of enraged walruses. He also had a more famous encounter with a polar bear, while attempting to obtain a bearskin as a present for his father, an exploit that later became part of the Nelson legend.

Drawing on the ship's journals and expedition commander Phipps' journal from the National Archives, the book creates a picture of the expedition and life on board. Using the ships' muster books it also details the ship's crews giving the different roles and ranks in the ships. The book is illustrated using some of the ship's drawings and charts and pictures of many objects used on the ship, while a navigational chart of the route taken has been created from the logbooks.

The book also looks at the overall concept of naval exploration as set in train by Joseph Banks and the Royal Society. The fact that the expedition failed as a result of poor planning with potentially tragic results demonstrates the difficulties and uncertainties of such an expedition. It also looks at a great naval commander at the earliest stage of his career and considers how the experience might have shaped his later career and attitudes. Other great captains and voyages are discussed alongside Nelson, including Captain Cook and his exploration of the south seas and the later ill-fated northern journeys of Franklin and Shackleton.

» Have you read this book? We'd like to know what you think about it - write a review about Nelson's Arctic Voyage book by Peter Goodwin and you'll earn 50c in Boomerang Bucks loyalty dollars (you must be a Boomerang Books Account Holder - it's free to sign up and there are great benefits!)

Peter Goodwin is an authority on the sailing warship. His published titles include the The Construction and Fitting of the Sailing Man of War (Conway, 1990), The Naval Cutter Alert (Conway 1992), Nelson's Ships (Conway 2002) and The Ships of Trafalgar (2005) and HMS Victory Pocket Manual. Peter was Keeper and Curator of HMS Victory for some 20 years and is a passionate advocate of Admiral Nelson. 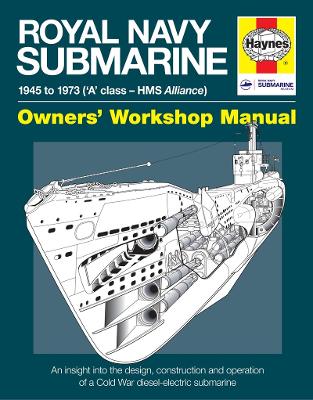 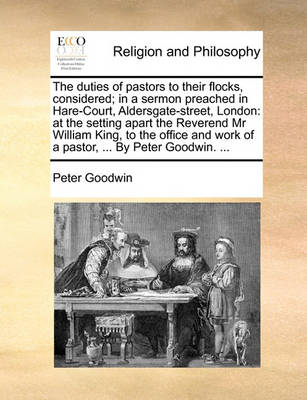 The Duties of Pastors to Their Flocks, Considered; In a Sermon Preached in Hare-Court, Aldersgate-Street, London: At the Setting Apart the Reverend MR William King, to the Office and Work of a Pastor, ... by Peter Goodwin.
Paperback / softback, May 2010
$34.71 $38.57