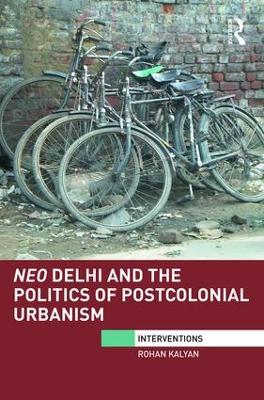 Neo Delhi and the Politics of Postcolonial Urbanism

This book is augmented by an interactive website (neodelhi.net). During research trips to Delhi and Gurgaon between 2008 and 2015 the author produced a multi-media urban archive that includes full color photos, an essay film, ethnographic videos, field notes and more pertaining to the arguments and ideas presented in this book. The reader is encouraged to actively engage with the website alongside this text.

This book challenges the prevailing metro-centric view of globalization. Rather than privileging the experiences of cities and urban regions in the industrialized world, it argues that cities in the so-called "developing" world present opportunities for scholars to re-think entrenched ideas of globalization, urban development and political community. Kalyan presents a trans-disciplinary exploration of the manifold possibilities and challenges that confront a "globalizing" megacity like New Delhi.

The book will be of interest to students and scholars of urban studies, postcolonial studies and inter-disciplinary studies. » Have you read this book? We'd like to know what you think about it - write a review about Neo Delhi and the Politics of Postcolonial Urbanism book by Rohan Kalyan and you'll earn 50c in Boomerang Bucks loyalty dollars (you must be a Boomerang Books Account Holder - it's free to sign up and there are great benefits!)

A Preview for this title is currently not available.
More Books By Rohan Kalyan
View All