For centuries, Pentecostalism has played a significant role in oppressively shaping the life of formerly colonized people of Africa. Moreover, its theologies have perpetuated neocolonial policies developed through the lens of colonial legacies rooted in la mission civilizatrice (mission to civilize). However, since the 1980s, Neo-Pentecostalism is increasingly reshaping the Congolese Christendom. It sanctions the theologies of a prosperity gospel rooted in an uncritical reading of the Bible and self-theologizing informed by a lack of literal, contextual translation effects. This book argues that the prosperity gospel bankrupts its adherents--in this case, the vulnerable, impoverished sections of Sub-Saharan Africa, and particularly the Postcolonial Congo--and instead offers a balanced theological reflection that broadens Neo-Pentecostal studies with an African voice encouraging the rewriting and rereading of the story of redemptive mission. The research engages a paradigm shift within global missions and world Christianity, or the history of missions as the platform to negotiate literal, prophetic, and contextual translation and retransmission of the biblical gospel. It is critical to reclaim and reestablish a hermeneutic of mixed methodologies and construct a contextual and critical interpretation of the Bible in the Congo. To avoid the African assumption of cultural baggage, which affects how the Congolese interpret the Bible, the interpreter has to be neutral and experience the voice of Christ in the text instead of the voice of Congolese culture; they must be a prophetic voice to reconstruct the authentic meaning of the salvific story. ""Nelson Ngoy's Neo-Pentecostalism is a major contribution to the study of mission, religion, and cultural integration in Central Africa. The book is exhaustive in its research and comprehensive in its approach. It succeeds in weaving together the many strands of history, indigenous African religious belief, contemporary social chaos, and religious fervor."" --Katherine C. Hill-Miller, Professor of English, Dean of Liberal Arts and Sciences, Long Island University, New York 2002-2015 ""The author speaks from a deep place of prophetic anguish, arguing that African Pentecostalism has lost its way and sold its soul to the prosperity gospel and late capitalism. Ngoy, nonetheless, offers key insights on how to turn the situation around for the good of the kingdom of God."" --Nimi Wariboko, Boston University, author of Nigerian Pentecostalism ""Neo-Pentecostalism deserves a reading in part because it presents a minority report/stance on contested matters regarding postcolonial Christian self-understandings and the relationship between syncretism and contextualization in majority world contexts but especially since it is one of the few African voices to extend--rather than be apologetic about--the Western argument from three to four decades ago that the prosperity message in that continent was imported from North America."" --Amos Yong, Fuller Seminary Nelson Kalombo Ngoy, a scholar of Mission, Evangelism, and World Christian Studies, obtained a PhD at Southwestern Baptist Seminary, Roy Fish School of Evangelism and Missions, a Masters of Divinity and a Masters of Sacred Theology from Drew University, a Masters of Art Intercultural Studies from Asbury Theological Seminary, and is a PhD candidate in Theology and Religion at the University of Birmingham, United Kingdom. Prior to pursuing graduate studies in the United States, Ngoy is a recipient of a Bachelors of Divinity at the Universite Methodiste of Katanga in the Democratic Republic of the Congo and a Bachelors of Theological Studies at Africa University in Zimbabwe. Dr. Ngoy has presented academic papers at Bicentennial United Methodist conference on ""Colonialism and Empire in Mission"" and at Yale-Edinburgh conference on ""World Christianity."" Also, he has served churches in the United States and Africa. 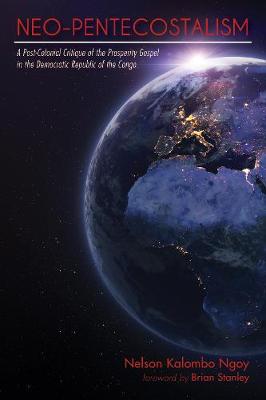 » Have you read this book? We'd like to know what you think about it - write a review about Neo-Pentecostalism book by Nelson Kalombo Ngoy and you'll earn 50c in Boomerang Bucks loyalty dollars (you must be a Boomerang Books Account Holder - it's free to sign up and there are great benefits!)


A Preview for this title is currently not available.
More Books By Nelson Kalombo Ngoy
View All