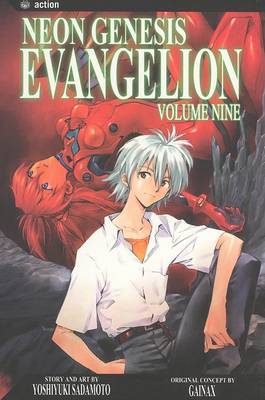 Books based on the landmark animated series that redefined the mecha genre.

Japan's most controversial anime series is over...but not the manga version of Neon Genesis Evangelion! Series co-creator Yoshiyuki Sadamoto's personal interpretation of the Evangelion characters and story is sure to intrigue new and old fans alike. In 2015, the "Angels" have returned, and Shinji Ikari, a fourteen year-old child of the new Earth, is forced by his father Gendo--commander of the secret organization NERV--to pilot the monstrous biomechanical weapon called "Evangelion" to match the Angels' fearsome power...

Pride in being an Evangelion pilot--that is the essence of the Second Child, Soryu Asuka Langley. But the day she was chosen to be so was the most horrible of her life--and as that truth rises to consume her, Shinji finds a new comrade in the strange, beautiful and disturbing Kaworu Nagisa. Born on the day of the Second Impact, he has been sent directly by SEELE, which alone knows him by his real name--Tabris, the Angel of Free Will.

Eva Vol. 9 contains a Japanese sound FX glossary plus a special bonus article on Kaworu, the mysterious stranger of the Evangelion story.

» Have you read this book? We'd like to know what you think about it - write a review about Neon Genesis Evangelion, Vol. 9 book by Yoshiyuki Sadamoto and you'll earn 50c in Boomerang Bucks loyalty dollars (you must be a Boomerang Books Account Holder - it's free to sign up and there are great benefits!)

Yoshiyuki Sadamoto, one of the founding members of the animation powerhouse Studio Gainax, is the character designer for THE WINGS OF HONNEAMISE, NADIA, NEON GENESIS EVANGELION the animated series, and many other anime, illustration and art projects. His latest art book, DER MOND, is also available in English translation from VIZ Media. NEON GENESIS EVANGELION is Sadamoto's only full-length manga series.

A Preview for this title is currently not available.
More Books By Yoshiyuki Sadamoto
View All