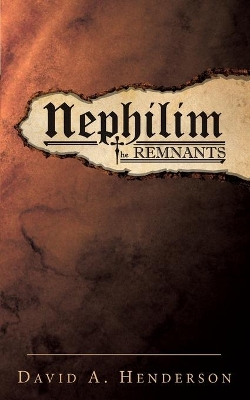 Description - Nephilim the Remnants by David A Henderson

In a time long since past, in the forgotten lands of Lore, now known as Arteah, live a few scattered remnants of an antediluvian race: the Nephilim (nef-il-eem). Thought to be half man and half fallen angel, these supernatural titans of strength and might ..". were the heroes of old, men of renown." (Gen. 6:4) Now, the ancient lands are in peril as one such Nephilim, the evil Count Vladimir, threatens to plunge the medieval world into a new age of darkness. Claiming to be immortal, he conquers towns, enslaving its people and burning their books. And one very old book in particular. But a faithful knight, who is secretly a Nephilim, stands in his way. Who are these Nephilim? What is the mystery surrounding their dark origins and great power? And how is one ancient book the key to unraveling Count Vladimir's dark age and saving the world? Embark on a dangerous journey in this epic tale of faith, betrayal, and sacrifice. NephilimTheRemnants.com

Book Reviews - Nephilim the Remnants by David A Henderson

» Have you read this book? We'd like to know what you think about it - write a review about Nephilim the Remnants book by David A Henderson and you'll earn 50c in Boomerang Bucks loyalty dollars (you must be a Boomerang Books Account Holder - it's free to sign up and there are great benefits!)