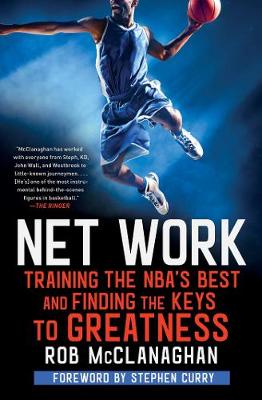 Net Work: Training the NBA's Best and Finding the Keys to Greatness

Description - Net Work: Training the NBA's Best and Finding the Keys to Greatness by Rob McClanaghan

From the NBA's most sought-after trainer and skills coach comes a "backstage pass to a part of the NBA that most fans never see" (Pete Thamel, Yahoo Sports)-how superstars like Stephen Curry, Kevin Durant, Derrick Rose, Russell Westbrook, and Kevin Love work to excel at the game.

When Rob McClanaghan failed to make the Syracuse basketball team as a walk-on freshman, he asked the coaches what he needed to do to achieve his goal the following year. They all agreed: get stronger. So that's what he did. For months, Rob traded fraternity parties and hanging out with buddies for hours in the gym lifting weights and shooting baskets. He was single-minded; the only thing that mattered was defying the odds. He returned to Syracuse for his sophomore year thirty pounds heavier and caught the coach's eye.

In Net Work, McClanaghan's "experience, knowledge, and keen understanding of the sport jumps off the pages" (Bob Iger, CEO of the Walt Disney Company) and he delivers what he brings to each of his training sessions: the same grit and spirit that got him into the college game. He calls it "the grind," and he knows that without it, even the most talented players will come up short. McClanaghan pushes his clients hard; he does whatever he can to drive his players to the edge and to simulate fourth quarter, at-the-buzzer adrenaline and fatigue.

An all-access pass to the practice courts of the NBA, Net Work combines McClanaghan's hard-earned wisdom-both on and off the court-with rare glimpses into the dues-paying life of professional athletes determined to stay at the top. McClanaghan shares stories of working one-on-one with some of basketball's greatest names, explaining how each athlete works to shore up his offensive and defensive weaknesses; perfect his nutrition; treat injuries; build mental toughness; and find occasional refuge from the glare of the spotlight. This book is life inside the NBA as you've never seen it, where players differentiate themselves by their willingness to put in relentless "net work."


Other Editions - Net Work: Training the NBA's Best and Finding the Keys to Greatness by Rob McClanaghan » Have you read this book? We'd like to know what you think about it - write a review about Net Work: Training the NBA's Best and Finding the Keys to Greatness book by Rob McClanaghan and you'll earn 50c in Boomerang Bucks loyalty dollars (you must be a Boomerang Books Account Holder - it's free to sign up and there are great benefits!)


A Preview for this title is currently not available.
More Books By Rob McClanaghan
View All