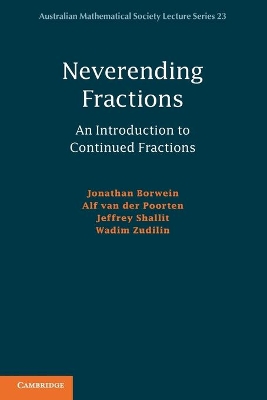 An Introduction to Continued Fractions

Despite their classical nature, continued fractions are a neverending research area, with a body of results accessible enough to suit a wide audience, from researchers to students and even amateur enthusiasts. Neverending Fractions brings these results together, offering fresh perspectives on a mature subject. Beginning with a standard introduction to continued fractions, the book covers a diverse range of topics, from elementary and metric properties, to quadratic irrationals, to more exotic topics such as folded continued fractions and Somos sequences. Along the way, the authors reveal some amazing applications of the theory to seemingly unrelated problems in number theory. Previously scattered throughout the literature, these applications are brought together in this volume for the first time. A wide variety of exercises guide readers through the material, which will be especially helpful to readers using the book for self-study, and the authors also provide many pointers to the literature.

» Have you read this book? We'd like to know what you think about it - write a review about Neverending Fractions book by Jonathan Borwein and you'll earn 50c in Boomerang Bucks loyalty dollars (you must be a Boomerang Books Account Holder - it's free to sign up and there are great benefits!)

A Preview for this title is currently not available.
More Books By Jonathan Borwein
View All