Jonathan Safran Foer's and Nathan Englander's spectacular Haggadah-now in paperback. Upon hardcover publication, NEW AMERICAN HAGGADAH was praised as a momentous re-envisioning through prayer, song, and ritual of one of our oldest, most timeless, and sacred stories-Moses leading the ancient Israelites out of slavery in Egypt to wander the desert for 40 years before reaching the Promised Land. Featuring a new translation of the traditional text by Nathan Englander and provocative essays by a collection of major Jewish writers and thinkers, it was received not only as a religious document but a magnificent literary and artistic achievement. Now, after two years of patience, those readers who asked for a paperback edition have gotten their wish. 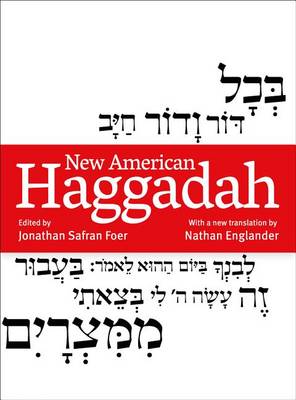 » Have you read this book? We'd like to know what you think about it - write a review about New American Haggadah book by Jonathan Safran Foer and you'll earn 50c in Boomerang Bucks loyalty dollars (you must be a Boomerang Books Account Holder - it's free to sign up and there are great benefits!)

Jonathan Safran Foer is the author of Everything Is Illuminated, Extremely Loud and Incredibly Close and Eating Animals. His books have been translated into thirty-six languages. "Everything Is Illuminated "received a National Jewish Book Award and a Guardian First Book Award, and was made into a film by Liev Schreiber. Foer lives in Brooklyn with his wife, the novelist Nicole Krauss, and their children. Nathan Englander is the author of the novel, The Ministry of Special Cases," the play, The Twenty-Seventh Man," and the story collections For the Relief of Unbearable Urges" and What We Talk About When We Talk About Anne Frank," which won the Frank O'Connor International Short Story Award and was a Pulitzer Prize Finalist. He lives in Brooklyn, New York with his wife Rachel Silver.

A Preview for this title is currently not available.
More Books By Jonathan Safran Foer
View All