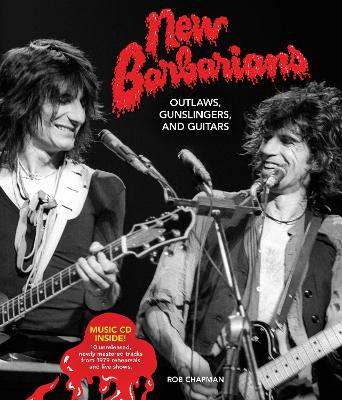 Get the behind-the-music story of the New Barbarians, the short-lived band founded by the Rolling Stones lead guitarist Ron Wood!

The band became known for hard-edged music, but it also gained notoriety for events such as the riot at the New Barbarians' first concert in Milwaukee-a riot that broke out when the special guests did not appear during the show. This and more wild, rollicking stories are included in The New Barbarians, which features behind-the-scenes anecdotes about the band members as well as dirt about its famous tour, plus background on the widespread influence of its music.Featuring never-before-published photography of the band by Bruce Silberman, who accompanied the New Barbarians on their US tour in 1979, this book is a feast for Stones fans and an essential contribution to rock and roll history.

» Have you read this book? We'd like to know what you think about it - write a review about New Barbarians book by Rob Chapman and you'll earn 50c in Boomerang Bucks loyalty dollars (you must be a Boomerang Books Account Holder - it's free to sign up and there are great benefits!)

Rob Chapman spent twenty-five years on the label side of the music business, working with such notable artists as Warren Zevon, Robert Plant, and Billy Idol. A former radio show host, he's particularly fond of blues and reggae. Rob lives with his wife Alyssa and daughters Izzy and Jade in Minneapolis.Bruce Silberman is a Los Angeles native who has photographed the likes of the New Barbarians, The Rolling Stones, and Carlos Santana. He has known Keith Richards and Ron Wood for more than 40 years, and he is a major contributor to The New Barbarians.Geoff Gans is an art director and designer whose work creating high-end boxed set album and book packages have gained him five Grammy nominations. As head of Geoff Gans Design operation, Gans has earned accolades for projects such as The Beach Boys' Pet Sounds boxed set, Motown's deluxe anthology series, The Grateful Dead's So Many Roads live retrospective boxed set, and deluxe boxed sets and reissues for John Coltrane. Gans helped bring to light the photography of the late Alan Pariser, who took many candid photos of his friends Keith Richards and Ron Wood during the New Barbarians' notorious tour.Henry Diltz is a folk musician and photographer who has been active since the 1960s. He has photographed bands and musicians including, the Modern Folk Quartet, The Eagles, The Monkees, James Brown, The Doors, Crosby, Stills, Nash & Young, Jimi Hendrix, and many more legendary artists. He was the official photographer at Woodstock and the Monterey and Miami Music Festivals and has photographed more than 200 record album covers. Diltz was the official photographer of the New Barbarians.

A Preview for this title is currently not available.
More Books By Rob Chapman
View All