A new city offers a new life - but what kind of life will Isabella and her friends find?

Isabella and her friends are nervous about what they'll find in the New City. It's inland and it's dry - far from the flooded city they've just left. Will their lives here be as luxurious and carefree as Xavier says? In fact, bleak, uncertain times have brought darkness and danger to New City.

The city has been divided in two- the citizens who have, and those who the ruling Major General says have come to steal from them - the refugees who have fled the rising waters, who are imprisoned in a camp on the edge of the city.

The kids of Grimsdon once faced sea monsters and evil harbour lords, but now they face new threats. From freakish weather events that whip up with little warning to the fierce misinformation that swirls around the city to the theft of their freedom, now they face the prison-like restrictions and control of the New City.

Unlike the refugees, they're heralded as heroes. But what does the Major General really want from them? 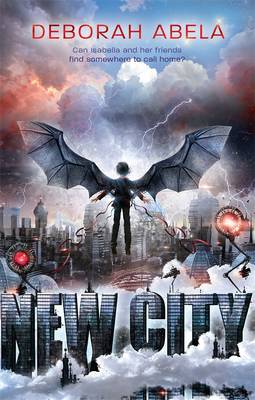 » Have you read this book? We'd like to know what you think about it - write a review about New City book by Deborah Abela and you'll earn 50c in Boomerang Bucks loyalty dollars (you must be a Boomerang Books Account Holder - it's free to sign up and there are great benefits!)