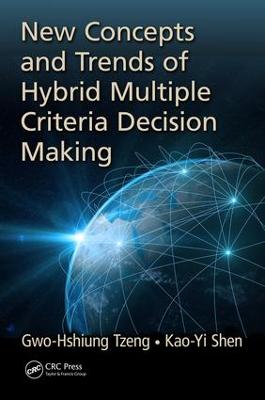 When people or computers need to make a decision, typically multiple conflicting criteria need to be evaluated; for example, when we buy a car, we need to consider safety, cost and comfort. Multiple criteria decision making (MCDM) has been researched for decades. Now as the rising trend of big-data analytics in supporting decision making, MCDM can be more powerful when combined with state-of-the-art analytics and machine learning. In this book, the authors introduce a new framework of MCDM, which can lead to more accurate decision making. Several real-world cases will be included to illustrate the new hybrid approaches.

» Have you read this book? We'd like to know what you think about it - write a review about New Concepts and Trends of Hybrid Multiple Criteria Decision Making book by Gwo-Hshiung Tzeng and you'll earn 50c in Boomerang Bucks loyalty dollars (you must be a Boomerang Books Account Holder - it's free to sign up and there are great benefits!)

Gwo-Hshiung Tzeng was born in 1943 in Taiwan. In 1977, he received a PhD degree course at Graduate School of Economics (major in management science) from Osaka University, Osaka, Japan. He serves as a chair professor at National Taipei University since 2013. Formerly He was an associate professor at National Chiao Tung University, Taiwan from 1977 to 1981, a research associate at Argonne National Laboratory from 1981 to 1982, a visiting professor in the Department of Engineering and Economic System, Energy Modeling Forum at Stanford University, from August 1997 to August 1998), a professor at National Chaio Tung University from 1981 to 2003, and a chair professor their from 2003 (lifelong), a President from 2004 to 2005 and distinguished chair professor from 2004 to 2013 at Kainan University. His current research interests include statistics, multivariate analysis, econometrics, network routing and scheduling, multiple criteria decision making, fuzzy theory, technology management, energy conservation, environment management, transportation systems and management, transportation planning and investment, logistics, location, urban planning, tourism management, electronic commerce, etc. He received the MCDM Edgeworth-Pareto Award from the International Society on Multiple Criteria Decision Making (June 2009), the world Pinnacle of Achievement Award in 2005, and the National Distinguished Chair Professor Award (highest honor offered) from the Ministry of Education Affairs of Taiwan in 2000.Kao-Yi SHEN received his Bachelor and Master degrees in Industrial Engineering from the Tunghai University in 1992 and 1998 respectively; and in 2002, he received the PhD degree in Business Administration from the Chengchi University in Taiwan. He worked as a senior analyst in the venture capital industry, and he also worked as a Marketing Manager and Head of Project Management in a Taiwan-based IT company. He developed more than 10 IT products, and he also owned several patents in TV-signals related applications in Taiwan, US, and China. He was an Assistant Professor from August 2009 to February 2015 and an associate professor from February 2015 to now at the Department of Banking and Finance in Chinese Culture University (SCE) in Taiwan, and he has published several papers to solve financial problems by using soft computing and MCDM methods in the journals like Soft Computing, Applied Soft Computing, Knowledge-based Systems, International Journal of Fuzzy Systems, etc..