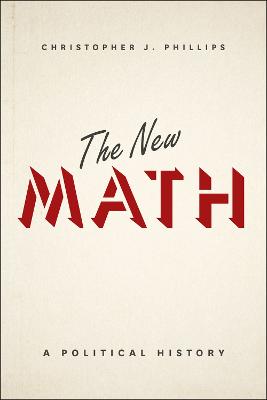 An era of sweeping cultural change in America, the postwar years saw the rise of beatniks and hippies, the birth of feminism, and the release of the first video game. It was also the era of new math. Introduced to US schools in the late 1950s and 1960s, the new math was a curricular answer to Cold War fears of American intellectual inadequacy. In the age of Sputnik and increasingly sophisticated technological systems and machines, math class came to be viewed as a crucial component of the education of intelligent, virtuous citizens who would be able to compete on a global scale.

In this history, Christopher J. Phillips examines the rise and fall of the new math as a marker of the period's political and social ferment. Neither the new math curriculum designers nor its diverse legions of supporters concentrated on whether the new math would improve students' calculation ability. Rather, they felt the new math would train children to think in the right way, instilling in students a set of mental habits that might better prepare them to be citizens of modern society?a world of complex challenges, rapid technological change, and unforeseeable futures. While Phillips grounds his argument in shifting perceptions of intellectual discipline and the underlying nature of mathematical knowledge, he also touches on long-standing debates over the place and relevance of mathematics in liberal education. And in so doing, he explores the essence of what it means to be an intelligent American?by the numbers.

Other Editions - The New Math by Christopher J. Phillips » Have you read this book? We'd like to know what you think about it - write a review about New Math book by Christopher J. Phillips and you'll earn 50c in Boomerang Bucks loyalty dollars (you must be a Boomerang Books Account Holder - it's free to sign up and there are great benefits!)

A Preview for this title is currently not available.
More Books By Christopher J. Phillips
View All