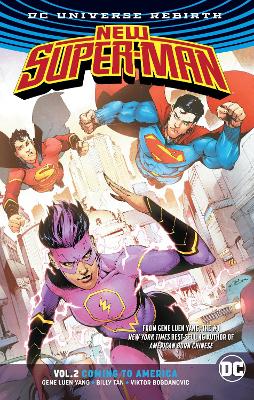 To uncover the truth behind his mother's murder, the New Super-Man must reawaken his full power under the tutelage of the mysterious I-Ching! But as training begins, Kong Kenan's ego isn't the only thing taking a beating! Plus, a shocking and deadly betrayal lurks in the shadows of the school that trained the New Bat-Man of China!

» Have you read this book? We'd like to know what you think about it - write a review about New Super-Man Vol. 2 Coming To America (Rebirth) book by Gene Luen Yang and you'll earn 50c in Boomerang Bucks loyalty dollars (you must be a Boomerang Books Account Holder - it's free to sign up and there are great benefits!)

Gene Luen Yang began making comics and graphic novels more than fifteen years ago. In 2006, his book AMERICAN BORN CHINESE was published by First Second Books. It became the first graphic novel to be nominated for a National Book Award and the first to win the American Library Association's Printz Award. It also won an Eisner Award for Best Graphic Album - New. In 2013, First Second Books released BOXERS & SAINTS, his two-volume graphic novel about the Boxer Rebellion. It was nominated for a National Book Award and won the L.A. Times Book Prize. He made his mainstream comics debut on SUPERMAN, with artists John Romita Jr. and Klaus Janson.a His other works include the comics continuation of the popular Nickelodeon cartoon Avatar- The Last Airbender. Currently, he writes NEW SUPER-MAN for DC Comics.