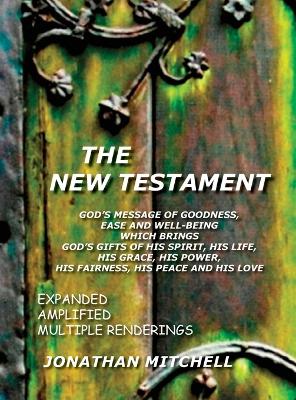 God's Message of Goodness, Ease and Well-Being Which Brings God's Gifts of His Spirit, His Life, His Grace, His Power, His Fairness, His Peace and His Love 2019 ed.

NEW 2019 EDITION (Revision of 2015 Edition) - Special Features of this Translation of the Greek New Testament offer: Multiple renderings of Greek words, presented parenthetically in lightface type, or as a conflation Contrasting readings from other New Testament manuscripts are presented, in addition to readings from different eclectic Greek texts and early individual NT manuscripts that present a significant change in the meaning of the text Multiple renderings of clauses, phrases and verses, where the optional readings all make sense to the context, with expansions and amplifications presented parenthetically Expanded renderings of Greek verbs to show the meanings of their individual tense characteristics Auxiliary adverbs are added which indicate the durative, lineal character of verbs in the present tense, the imperfect tense and the future tense. Examples of these explanatory words are: "continuously; constantly; repeatedly; habitually; progressively," accordingly as the contexts suggest. Other examples are: "keep on; continue; one-after-another" Rendering the aorist tense (punctiliar action) as either, or both, a simple past tense, or as a simple present tense - a tense that simply presents the fact of the action, apart from whether the action was/is completer or incomplete; as a sudden, or point in time, or snapshot, of the whole action; as indefinite as to kind of action (whether ongoing or completed) - depending on the context Rendering the perfect tense as a completed action of the past which continues in effect on into the present time of the writing of the text Rendering each verse in boldface, for one complete translation of the verse Inserting other well-attested manuscript readings, in brackets A translation that is on the literal side of the literal-to-paraphrase spectrum Offering an additional, interpretive paraphrase where the literal rendering of the Greek text seems awkward, or uncertain For continuity of the Hebrew and Christian Scriptures, inserting "[= Yahweh]" into OT quotes, where that Name was in the Hebrew texts Rendering many Greek terms by their linguistic elements (morphemes) to present the linguistic ideas behind the roots/stem and prefixes from which the words were built Supplies optional functioning of noun and adjective cases, where the context supports these options Offering multiple prepositions for the potential functions of noun cases, in prepositional phrase where there is no expressed preposition in the text; example: "to, for, by, in/among; with" before a noun in the dative case; or, with the genitive/ablative case, offering readings that indicate a possessive noun, a kind of relationship with the noun, the noun indicating a source, or, apposition (definition). Examples are: "the Word of God; God's Word; the Word relating to or pertaining to God; the Word from God; the Word, which is God." All of these options are possible from a single spelling of a noun in the genitive/ablative case, or in the dative case This translation offers the reader the opportunity to participate with the Spirit in the various potential readings of a word, a phrase, a clause, a verse - so long as they make sense to the immediate and greater contexts. Jonathan Mitchell has an MA in Anthropology. He began study of New Testament Greek in 1962.

Other Editions - The New Testament by Jonathan Paul Mitchell 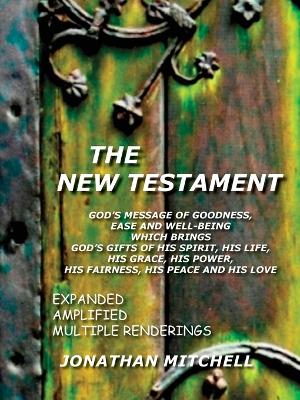 » Have you read this book? We'd like to know what you think about it - write a review about New Testament book by Jonathan Paul Mitchell and you'll earn 50c in Boomerang Bucks loyalty dollars (you must be a Boomerang Books Account Holder - it's free to sign up and there are great benefits!)


A Preview for this title is currently not available.
More Books By Jonathan Paul Mitchell
View All