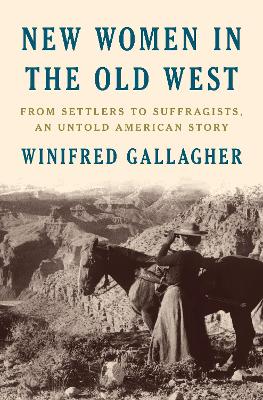 New Women In The Old West: From Settlers to Suffragists, An Untold American Story

Description - New Women In The Old West: From Settlers to Suffragists, An Untold American Story by Winifred Gallagher

A riveting history of the American West told for the first time through the pioneering women who used the challenges of migration and settlement as opportunities to advocate for their rights, and transformed the country in the process

Between 1840 and 1910, hundreds of thousands of men and women traveled deep into the underdeveloped American West, lured by the prospect of adventure and opportunity, and galvanized by the spirit of Manifest Destiny. Alongside this rapid expansion of the United States, a second, overlapping social shift was taking place- survival in a settler society busy building itself from scratch required two equally hardworking partners, compelling women to compromise eastern sensibilities and take on some of the same responsibilities as their husbands. At a time when women had very few legal or economic--much less political--rights, these women soon proved they were just as essential as men to westward expansion. Their efforts to attain equality by acting as men's equals paid off, and well before the Nineteenth Amendment, they became the first American women to vote.

During the mid-nineteenth century, the fight for women's suffrage was radical indeed. But as the traditional domestic model of womanhood shifted to one that included public service, the women of the West were becoming not only coproviders for their families but also town mothers who established schools, churches, and philanthropies. At a time of few economic opportunities elsewhere, they claimed their own homesteads and graduated from new, free coeducational colleges that provided career alternatives to marriage. In 1869, the men of the Wyoming Territory gave women the right to vote--partly to persuade more of them to move west--but with this victory in hand, western suffragists fought relentlessly until the rest of the region followed suit. By 1914 most western women could vote--a right still denied to women in every eastern state.

In New Women in the Old West, Winifred Gallagher brings to life the riveting history of the little-known women--the White, Black, and Asian settlers, and the Native Americans and Hispanics they displaced--who played monumental roles in one of America's most transformative periods. Like western history in general, the record of women's crucial place at the intersection of settlement and suffrage has long been overlooked. Drawing on an extraordinary collection of research, Gallagher weaves together the striking legacy of the persistent individuals who not only created homes on weather-wracked prairies and built communities in muddy mining camps, but also played a vital, unrecognized role in the women's rights movement and forever redefined the "American woman."

Book Reviews - New Women In The Old West: From Settlers to Suffragists, An Untold American Story by Winifred Gallagher

» Have you read this book? We'd like to know what you think about it - write a review about New Women In The Old West: From Settlers to Suffragists, An Untold American Story book by Winifred Gallagher and you'll earn 50c in Boomerang Bucks loyalty dollars (you must be a Boomerang Books Account Holder - it's free to sign up and there are great benefits!)


A Preview for this title is currently not available.
More Books By Winifred Gallagher
View All