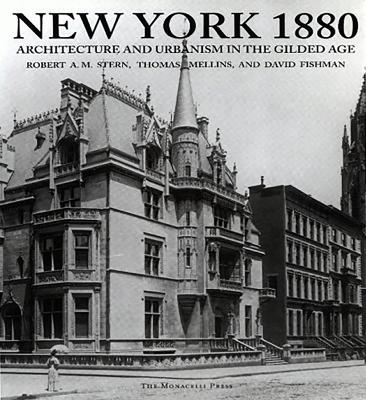 This is the fourth volume in architect and historian Robert A. M. Stern's monumental series of documentary studies of New York City architecture and urbanism. The three previous books in the series, New York 1900, New York 1930, and New York 1960, have comprehensively covered the architects and urban planners who defined New York over the course of the twentieth century.

In this volume, Stern turns back to 1880 -- the end of the Civil War, the beginning of European modernism -- to trace the earlier history of the city. This dynamic era saw the technological advances and acts of civic and private will that formed the identity of New York City as we know it today. The installation of water, telephone, and electricity infrastructures as well as the advent of electric lighting, the elevator, and mass transit allowed the city to grow both out and up. The office building and apartment house types were envisioned and defined, changing the ways that New Yorkers worked and lived. Such massive public projects as the Brooklyn Bridge and Central Park became realities, along with such private efforts as Grand Central Station.

Like the other three volumes, New York 1880 is an in-depth presentation of the buildings and plans that transformed New York from a harbor town into a world-class metropolis. A broad range of primary sources -- critics and writers, architects, planners, city officials -- brings the time period to life and allows the city to tell its own complex story. The book is generously illustrated with over 1,200 archival photographs, which show the city as it was, and as some parts of it still are.

» Have you read this book? We'd like to know what you think about it - write a review about New York 1880 book by Robert A.M. Stern and you'll earn 50c in Boomerang Bucks loyalty dollars (you must be a Boomerang Books Account Holder - it's free to sign up and there are great benefits!)

A Preview for this title is currently not available.
More Books By Robert A.M. Stern
View All