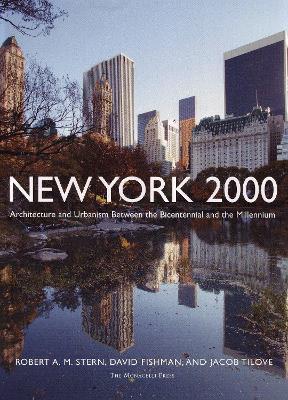 Touted by Publisher's Weekly as "an unprecedented record," the new book in the New York series, New York 2000, is indeed an exceptional survey of this great city's architectural heritage. As the world's financial and cultural capital, New York demands the best in architectural design and balances the constant pressure to build with the need to preserve its historic fabric.

Author Robert A. M. Stern and his colleagues trace the rise and fall of the real estate market, the impact of the designation of historic districts and new zoning on development, and the emergence of new commercial and residential centers. The survey is organized geographically, moving north from Lower Manhattan and covering the Bronx, Queens, Brooklyn, and Staten Island as well.

New York 2000 documents milestones in the city's architectural history over the past forty years-the development of Battery Park City, the rebirth of Harlem and Times Square, the creation of the cultural precinct around the new MoMA, and the reclaiming of the waterfront along the East and Hudson Rivers as recreational parkland-and celebrates the achievements of internationally recognized architects such as Sir Norman Foster, Cesar Pelli, Richard Meier, and Renzo Piano.

» Have you read this book? We'd like to know what you think about it - write a review about New York 2000 book by Robert A.M. Stern and you'll earn 50c in Boomerang Bucks loyalty dollars (you must be a Boomerang Books Account Holder - it's free to sign up and there are great benefits!)

A Preview for this title is currently not available.
More Books By Robert A.M. Stern
View All