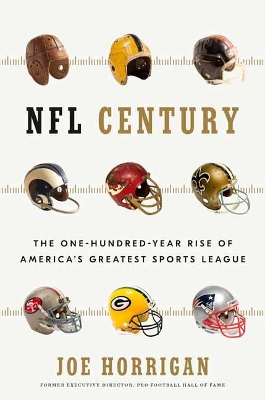 The NFL has come a long way from its founding in Canton, Ohio in 1920. In the hundred years that have passed since that fateful day, the former scrappy upstart league that once struggled to stay afloat has become America's most popular and lucrative professional sport. Along the way it has survived a host of challenges--the Great Depression and WW2, controversies and scandals, battles over labor rights and competition from rival leagues--even as it has produced American icons like Vince Lombardi, Joe Montana and Tom Brady. It is an extraordinary and entertaining history that could only be told by Joe Horrigan, Executive Director of the Pro Football Hall of Fame and perhaps the greatest living historian of the NFL. By drawing upon decades of NFL archives, Joe has written the definitive history of the NFL. Compelling, eye-opening and authoritative, NFL Century is a must-read for NFL fans and anyone who loves the game of football.

» Have you read this book? We'd like to know what you think about it - write a review about NFL Century: The One-Hundred-Year Rise of America's Greatest Sports League book by Joe Horrigan and you'll earn 50c in Boomerang Bucks loyalty dollars (you must be a Boomerang Books Account Holder - it's free to sign up and there are great benefits!)


A Preview for this title is currently not available.
More Books By Joe Horrigan
View All