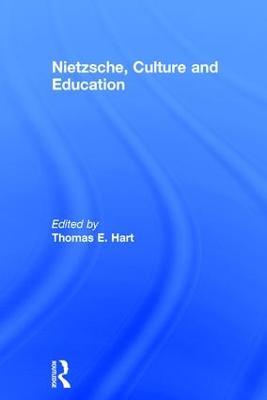 In the spring of 1872 Friedrich Nietzsche gave a series of public lectures titled 'On the Future of our Educational Institution' to an audience in Basel, Switzerland. In the lectures he made clear his attitude about what was wrong with education and how it had negatively affected the culture of his day. More than one hundred years after the death of Nietzsche, his legacy remains one of the most pervasive in philosophical thought. While his influence on philosophical thought concerning culture is everywhere to be found, his influence on the philosophy of education has yet to find a place in mainstream thought on the subject, in spite of the inextricable connection between the two. This collection has been put together in an effort to redress this situation. Nietzsche, Culture and Education brings together a collection of specially commissioned essays on the theme of Nietzsche's cultural critique and its use in and effect on educational theory. The international character of the contributors gives this work a polyvalent perspective on these areas of Nietzsche's philosophy. This publication will be a valuable source book for both undergraduate and postgraduate students of philosophy, education and the social sciences as well as for Nietzsche specialists.

» Have you read this book? We'd like to know what you think about it - write a review about Nietzsche, Culture and Education book by Thomas E. Hart and you'll earn 50c in Boomerang Bucks loyalty dollars (you must be a Boomerang Books Account Holder - it's free to sign up and there are great benefits!)