Abed Azzam offers a fresh interpretation of Nietzsche's engagement with the work of Paul the Apostle, reorienting the relationship between the two thinkers while embedding modern philosophy within early Christian theology. Paying careful attention to Nietzsche's dialectics, Azzam situates the philosopher's thought within the history of Christianity, specifically the Pauline dialectics of law and faith, and reveals how atheism is constructed in relation to Christianity.

Countering Heidegger's characterization of Nietzsche as an anti-Platonist, Azzam brings the philosopher closer to Paul through a radical rereading of his entire corpus against Christianity. This approach builds a compelling new history of the West resting on a logic of sublimation, from ancient Greece and early Judaism to the death of God. Azzam discovers in Nietzsche's philosophy a solid, tangible Pauline structure and virtual, fragile Greek content, positioning the thinker as a forerunner of the recent "return to Paul" led by Badiou, Agamben, ?i?ek, and Breton. By changing the focus of modern philosophical inquiry from "Nietzsche and philosophy" to "Nietzsche and Christianity," Azzam initiates a major challenge to the primacy of Plato in the history of Western philosophy and narrow certainties regarding Nietzsche's relationship to Christian thought.

Other Editions - Nietzsche Versus Paul by Abed Azzam 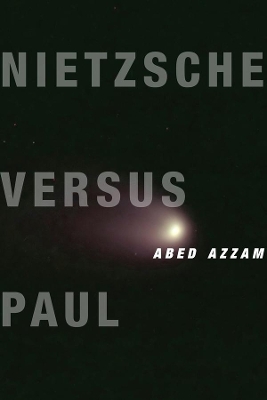 » Have you read this book? We'd like to know what you think about it - write a review about Nietzsche Versus Paul book by Abed Azzam and you'll earn 50c in Boomerang Bucks loyalty dollars (you must be a Boomerang Books Account Holder - it's free to sign up and there are great benefits!)