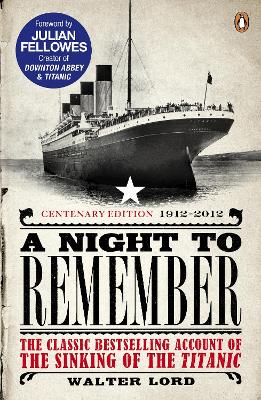 A Night to Remember

The Classic Bestselling Account of the Sinking of the Titanic

Description - A Night to Remember by Brian Lavery

'Joughin casually tightened his lifebelt. Then he glanced at his watch - it said 2.15. As an afterthought, he took it off and stuck it into his hip pocket. He was beginning to puzzle over his position when he felt the stern dropping under his feet - it was like taking an elevator. As the sea closed over the stern, Joughin stepped off into the water.'

On 14th April 1912, just before midnight on a clear moonless sea, the White Star Line's massive cruise liner struck an iceberg. She sank within hours. Of 2,200 passengers and crew, only 700 survived.

Walter Lord's definitive account of the Titanic's voyage, wreck and aftermath is a classic of investigation, based on the testimony of survivors. A Night To Remember became the source for countless films, novels and plays - and it has never been bettered.

'I've never come across a book to rival a night to remember.' Julian Fellows creator of Downton Abbey and Titanic

'Stunning, incomparably the best on its subject' The New York Times

Other Editions - A Night to Remember by Brian Lavery Book Reviews - A Night to Remember by Brian Lavery

» Have you read this book? We'd like to know what you think about it - write a review about Night to Remember book by Brian Lavery and you'll earn 50c in Boomerang Bucks loyalty dollars (you must be a Boomerang Books Account Holder - it's free to sign up and there are great benefits!)

A graduate of Princeton University and Yale Law, Walter Lord served in England with the American intelligence service during the Second World War. His interest in the Titanic dates back to 1926 when, at ten years old, he persuaded his family to cross the Atlantic on the Olympic, sister ship to the doomed ocean liner. Lord was renowned for his knowledge of the Titanic catastrophe, serving as consultant to director James Cameron during the filming of Titanic. A Night to Remember was published in 1955 and has never been out of print. Walter Lord died in 2002.