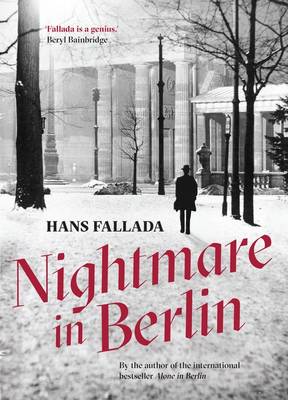 Written with Fallada's distinctive power and vividness, Nightmare in Berlin captures the demoralised and desperate atmosphere of post-war Germany in a way that has never been matched or surpassed.

Available for the first time in English, here is an unforgettable portrayal by a master novelist of the physical and psychological devastation wrought in the homeland by Hitler's war.

Late April, 1945. The war is over, yet Dr Doll, a loner and 'moderate pessimist', lives in constant fear. By night, he is haunted by nightmarish images of the bombsite in which he is trapped - he, and the rest of Germany. More than anything, he wishes to vanquish the demon of collective guilt, but he is unable to right any wrongs, especially in his position as mayor of a small town in north-east Germany that has been occupied by the Red Army.

Dr Doll flees for Berlin, where he finds escape in a morphine addiction- each dose is a 'small death'. He tries to make his way in the chaos of a city torn apart by war, accompanied by his young wife, who shares his addiction. Fighting to save two lives, he tentatively begins to believe in a better future.

Written with Fallada's distinctive power and vividness, Nightmare in Berlin captures the demoralised and desperate atmosphere of post-war Germany in a way that has never been matched or surpassed.

» Have you read this book? We'd like to know what you think about it - write a review about Nightmare in Berlin book by Hans Fallada and you'll earn 50c in Boomerang Bucks loyalty dollars (you must be a Boomerang Books Account Holder - it's free to sign up and there are great benefits!)

Hans Fallada: Hans Fallada (1893-1947) was the pen name of German author Rudolf Ditzen, whose books were international bestsellers on a par with those of his countrymen Thomas Mann and Hermann Hesse. He opted to stay in Germany when the Nazis came to power, and eventually had a nervous breakdown when he was put under pressure to write anti-Semitic books. He was cast into a Nazi insane asylum, where he secretly wrote The Drinker. Immediately after the war he wrote his last two novels, The Nightmare and Alone in Berlin, but he died before either book could be published.Allan Blunden: Dr Allan Blunden is a British translator who specialises in German literature. He is best known for his translation of Erhard Eppler's The Return of the State? which won the Schlegel-Tieck Prize. He has also translated biographies of Heidegger and Stefan Zweig, and the prison diary of Hans Fallada.

A Preview for this title is currently not available.
More Books By Hans Fallada
View All