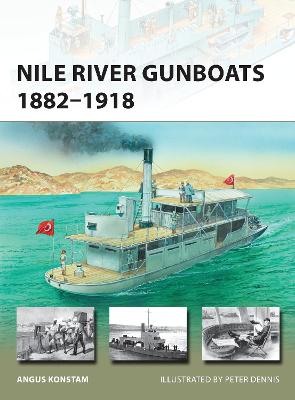 For more than 30 years the Nile river gunboat was an indispensable tool of empire, policing the great river and acting as floating symbols of British imperial power. They participated in every significant colonial campaign in the region, from the British invasion of Egypt in 1882 to the Battle of Omdurman in 1898, when Britain finally won control of the Sudan. After that, the gunboats helped maintain British control over both Egypt and the Sudan, and played a key role in safeguarding British interests around the headwaters of the Nile - a region hotly contested by several European powers. Featuring specially commissioned artwork, this comprehensive volume offers a detailed analysis of the Nile river gunboats' entire career, from policing British colonial interests along the great river to defending Egypt against the Ottoman Turks in World War I.

» Have you read this book? We'd like to know what you think about it - write a review about Nile River Gunboats 1882-1918 book by Angus Konstam and you'll earn 50c in Boomerang Bucks loyalty dollars (you must be a Boomerang Books Account Holder - it's free to sign up and there are great benefits!)

Angus Konstam hails from the Orkney Islands, and is the author of over 50 books, 30 of which are published by Osprey. This acclaimed and widely published author has written several books on piracy, including The History of Pirates, and Blackbeard: America's Most Notorious Pirate. A former naval officer and museum professional, he worked as the Curator of Weapons at the Tower of London and as the Chief Curator of the Mel Fisher Maritime Museum in Key West, Florida. He now works as a full-time author and historian, and lives in Edinburgh, Scotland. Peter Dennis was born in 1950. Inspired by contemporary magazines such as Look and Learn he studied illustration at Liverpool Art College. Peter has since contributed to hundreds of books, predominantly on historical subjects, including many Osprey titles. A keen wargamer and modelmaker, he is based in Nottinghamshire, UK.